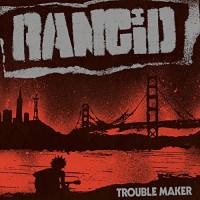 For their ninth album, Trouble Maker, Rancid makes a radical left turn from the norm, pushing far past the boundaries, not just of punk, but of the traditional rules of music itself, creating the most original sound to come out of any musical artist since Beethoven.

I’m just kidding. It's a Rancid album. It's 17 tracks of street punk.

I mean, what more is there to say about Rancid at this point that we don't already know? Born out of the ashes of the greatest ska-punk band of all time, Operation Ivy, Rancid has failed in nine albums to match what Operation Ivy accomplished in their one. Still, they've come damn close twice with …And Out Come the Wolves and their second self-titled album, sometimes referred to as Rancid 2000. The rest of their discography has been uneven, especially of late, with their last two albums being the weak Let the Dominoes Fall and the mediocre album with the superfluous ellipsis, ...Honor is All We Know. Over the years, the band has had outstanding side projects like Lars Fredricksen and the Bastards, Tim Timebomb, and most notably The Transplants, but whenever the band members return to Rancid, they largely keep churning out the same music they've been making since 1991.

Trouble Maker is at least better than its two aforementioned predecessors in that the band sounds like they actually want to be there. They rip through the album with a newfound vigor and vitality that was missing from …Honor. The first three tracks give a pulse pounding intro that doesn't slow down for a second with “Track Fast,” “Ghost of a Chance,” and “Telegraph Avenue.” For fans of Rancid’s ska side, I’m sorry to report that there's only one ska song on the album, “Where I’m Going.” Luckily, though, it just happens to be the best song on the album. With its tag-team vocals between Lars Fredricksen and Tim Armstrong and its surprisingly catchy handclaps, “Where I’m Going” is an instant Rancid classic. It's also the only song that slows down enough for my favorite thing about Rancid: Tim Armstrong’s bizarre, mouth-full-of-marbles, drawl of a singing voice. “Farewell Lola Blue “ is a pretty song that succeeds because there's nothing Rancid is better at than punk rock nostalgia. “Bovver Rock and Roll” is an odd duck of a song because, you see, Rancid’s biggest influence is The Clash, The Clash hated The Rolling Stones, and the transitive property fails to apply here because “Bovver” is a straight up Rolling Stones-style song. “This is Not the End,” an ironic title for a closing track, is the album's biggest balls-to-the-wall rocker, with maddening guitar solos that bring together a cacophony of beautiful noise to close out the album.

Admittedly, there isn't a single bad song on Trouble Maker. The problem is, there also isn't a single song on it that shows that they've grown as a band in 26 years, with the very slight exception of “Bovver Rock and Roll.”. Sure they've done some experiments throughout their career,, most notably Indestructible’s Dylanesqe “Arrested in Shanghai,” but these instances of deviation from the norm are few and far between and are quickly discarded so that Rancid can return to something like Trouble Maker which is just more of the same old Rancid. But for those do just want some of that classic Rancid sound, Trouble Maker is one of the finer examples of it.