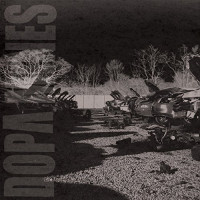 After a five year absence, Cincinnati, Ohio’s The Dopamines return with Tales of Interest, which takes its name from a similar titled Futurama episode. Tales of Interest is their first release for Rad Girlfriend Records and first welcoming touring guitarist John Goldman to the fold with bassist Jon Weiner, drummer Michael Dickson and guitarist and vocalist Jon Lewis rounding out the newly minted four piece. The Dopamines have been pretty up-front and honest that they view the band as a great way to get cheap beer in exchange for playing a couple punk rock songs in front of their friends. In that fine tradition, Tales of Interest picks up right where they left out. Break out the Keystone Light.

The instrumental opener “Kalte Ente” kicks off the album with one immediately noticing the aggression behind those handful of chords has intensified since The Dopamines last go around. The opener transitions into “The King of Swilling Power, Pt. I, II, III.” As the song makes it way into the middle section, the band operates seamlessly somewhere between full force and falling apart. They straddle this line through the duration of Tales of Interest 33 minute runtime with Lewis’ vocal performance complementing the daily tales of exasperation and frustration.

The album leaves little room to breathe between the tracks with most blending from one song into the other. While this does make for the occasional filler, it never lasts long given the average runtime of the songs. This is not a detriment however because despite this feature,Tales of Interest is the most cohesive effort The Dopamines have put out revisiting song titles and themes with the addition of a few reprises. The instrumentation has also stepped up from previous releases with some pretty inspired breakdowns closing out songs. The added guitar shines through in these sections.

Stand out tracks on the album include “Ire,” “Common Rue,” and “Heartbeaten by the Police” with the latter claiming the title of most melodic in this collection of songs. One of best features of the album is the quick hooks The Dopamines litter throughout the record. These earworms usually stick around for only a few bars of the song, melodically similar to Joyce Manor in that sense, but make you want to immediately find them in repeat listens. It’s damn near impossible to resist finger pointing when Lewis’ kicks into the hook in “Ire” shouting “and I can’t think of a better way/to spit it right back into your lying face.” Similarly, the closing line of “Common Rue” with Lewis yelling “here’s the advice I give to you/fuck it before it fucks you” is one of the highlights of the record in spite of the fact that it only sticks around for the closing bars of the song.


Overall, this record isn’t going to change your opinion of The Dopamines, but if you’re looking for a solid punk rock album in the vein of Dillinger Four, early Joyce Manor, or Off With Their Heads, Tales of Interest absolutely satisfies.