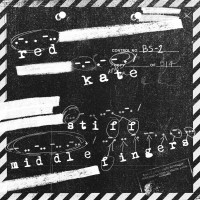 Red Kate’s second album, unamerican activities, as decent as it was (and still is) did not hint at how good the band’s two songs on this split single would be. The album features an angry punk delivery, with a healthy dose of rock’n’roll at times which was reminiscent of the late 1970s at times. However, these new recordings, “Urban Church” and “Hole”, seem as if they come from a different band.

This time out, Red Kate add a chunk of Sweden’s Rotten Mind into the mix for the first track, whilst “Hole” starts with an intro that would befit the Minutemen and then touches on the Big Boys as the song progresses. These tracks exceed anything the band has done before and make me excited for when they get round to releasing a third long player. For now I’ll bathe in the wonder of these two tracks.

Whereas Red Kate’s efforts were to my immediate liking, Stiff Middle Fingers (I wonder where they got the idea for that name?!) took a good half a dozen plays before I was on board. “3 Minutes to Midnight” reminds me slightly of NOFX with an added country punk influence and features this simple but resonant verse:

‘Wake up, work, go sleep, repeat, it’s such a fucking chore
Degrade yourself for cash just means that you’re a whore
I’ve fought a valiant fight but I’m giving up this war!
‘Cause I won’t be getting out of this bed here anymore’

This is definitely a sentiment I frequently find myself having, even if I don’t getting round to acting on it!

On “Manically Delicious”, there is more of a frantic delivery and it is the better of the two tracks from this band hailing from Lawrence, Kansas. I’ve since listened to some more of S.M.F.’s work and it’s pretty damn good, so another outfit for me to keep an ear open for in the future. Finally, despite my advanced years, I find the vocalist’s moniker of Turdking to be quite amusing. Apparently S.M.F. began life as a covers band so I’ve tried out some of their interpretations and credit must be given to this lot for managing to make an Anti-Nowhere League song sound half decent – no mean feat given how awful A.N.L. are!

The Dopamines: Tales of Interest

Captain We're Sinking: The King of No Man