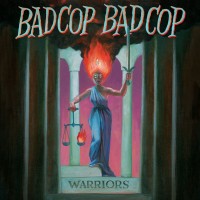 For their first couple of EP’s and their first full-length Not Sorry, Bad Cop/Bad Cop have been having fun and experimenting and finding their sound. But for the band’s second album Warriors, Bad Cop/Bad Cop not only take a more serious tone lyrically, they also solidified their sound and have gained a lot more confidence in their studio performance and song writing in general.

Two songs that really stand out on Warriors are “Retrograde” and the title track. “Retrograde” is where you can hear big vocal improvements from Stacey Dee. She is able to hit some very high notes, but she still maintains some of that gruffness in her singing — a really wonderful combination especially when the rest of band comes in with their signature three-part harmonies to back her up. Bad Cop/Bad Cop also branched out musically and incorporated this bright, descending guitar riff that really breaks up the song quite well. “Warriors” is also a notable track on the album first and foremost because bassist Lihn Le sings lead vocals (also in I’m Done”), which is something we have not heard too often on the band’s other releases. It is interesting because while Stacey has a gruffer voice and Jennie Cotterill has a lighter voice, Linh’s voice seems to be right in the middle of the other two. This track, too has their three-part harmonies, but also some awesome, anthemic gang vocals in the chorus as well. What also makes “Warriors” a stand out track of eleven on this album is the thick and fuzzy bass line that takes the lead while jangly, distorted guitars work in the background as great contrast. This song is where some of the more blunt and rebellious, sociopolitical lyrics can be heard as well.

It isn’t just the subject of politics though that Bad Cop touches upon in Warriors. The song “Victoria” is a particularly heart-wrenching track that delves into the subject of the abuse and suicide of an adolescent girl with lyrics like, “She couldn’t cope and got a rope/When She had lost all hope/And didn’t know what else to/She left a note, an anecdote of her troubles and woes.”

Bad Cop/Bad Cop have given us a yet another great, dynamic pop punk record. Though there are a couple of instances where the lyrics get a little too preachy (which I realize is subjective), the songs on this album are so catchy that can easily be overlooked. For those of you who have followed Bad Cop’s career thus far you will definitely find Warriors enjoyable — the majority of pop punk fans who give it a listen will actually.

Captain We're Sinking: The King of No Man