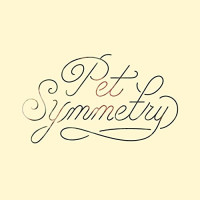 For such a young man, Evan Thomas Weiss has had quite the prolific career. Ambitious too. With Into It. Over It., he has released three proper albums, countless EPs and even went a full year releasing a song a week. He’s also made an album under the name Their / They’re / There with Mike Kinsella. And of course there’s Pet Symmetry.

While Into It. Over It. has been one of the leading bands in the emo resurgence, Pet Symmetry is clearly what Weiss enjoys doing in his sliver of free time. The stakes on new album Vision are much smaller, making the results looser. Along with Erik Czaja and Marcus Nuccio (currently and formerly of Dowsing, respectively), the band crafts tight emo pop numbers. While it never feels as grand a statement as Into It. Over It., Weiss tackles some similar topics, albeit having a little more fun.

Most songs on Vision wear the bevy of influences on their sleeves. Motion City Soundtrack's presence looms heavily over the first half as Weiss structures some denser topics over comfortable pop melodies. “You & Me & Mt. Hood” imitates them to a T and includes some absolutely killer bass, while Justin Pierre would be extremely proud of the truce Weiss calls on “50%.” The back half is less regulated, reminiscent of their debut Pet Hounds. The late 90’s/early 00’s influence that inspires Weiss (and Dowsing, for that matter) shines through here. “Blue Bottle” would comfortably fit on any second wave emo band’s record from 2004. More current vocal distortion has a heavy hand in “Eyesores” while the following “Mostly Water” fights for its spot on Brand New’s Untitled. Finally, Pet Symmetry teams up with Kittyhawk’s Kate Grube for the lovely, delicate closer “Lint Roller.”

Vision works wonderfully as a side project for the three gentlemen. It never comes across too self-serious but doesn’t feel joke-y either. They’ve written some well thought out emo numbers that fit nicely into the current state of the genre.