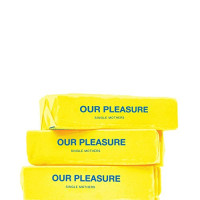 Single Mothers' self-titled EP in 2011 remains one of the punchiest pieces of music I've ever experienced. Punk and post-hardcore refined to near-perfection. Andrew Thomson's insulting and obnoxious vocals was the kicker for me, and he's had quite a lot to say since then as he left the band to go mine for gold in Canada only to return after hitting the bottle too hard. We can all relate.

His somewhat unstable mentality then meshed in perfectly on Meltdown and Negative Qualities which found him lashing out more at himself. It wasn't about things like girls, religion and family anymore -- he blamed himself. Our Pleasure feels like the closing chapter in all of this as he's seemingly grown out of all that stupid, dumb shit and is ready to move on as an adult.

Our Pleasure continues their toned-down aggression compared to their older stuff (but make no mistake, it still has that hardcore/punk/garage lo-fi sound cocked and ready to go). "High Speed" and "Long Distance" (which has riffy spunk a la PUP) are prime examples of this. However, what really stand out are the musical styles I've always criticized them for and that's the slower, more melodic shifts. I think this time it's blended in better with their anger and zero-fucks-given attitude. "People are Pets" and "Leash" are songs that come to mind. Anthemic, singalong but songs you'll be in the pit shoving people around to. The one that stand out the most is "Bolt Cutters" which ends the album, and honestly I didn't think I'd love one of their tracks as much as I did "Winter Coats." This does the trick though, rambling about a break-up in a style middling Thomson's mumbling/speaking/singing disposition on the mic.

Overall, Our Pleasure feels musically intricate on a new level -- thicker basslines, much more pronounced drums and priding itself with a lot of guitar-driven character. It's them at their most distinct and honestly, most assertively powerful stance. Single Mothers have never felt as exploratory and a lot of that has to do with Thomson, who's not that tongue-in-cheek bastard you love to hate on the mic anymore. Now, he's just being himself -- all grown up and mature.

Nah... he's still a bastard and it's made them sound as better than ever.