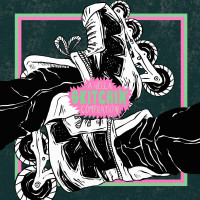 Put out your own records

I’ve been crowing about how good the Grand Rapids punk scene is for the last couple of years. Now I have some documentation to help prove my point. Not every band on A Hella Skitchin’ Compilation is from GR, but the city is well represented. Skitchin’ is a good old fashioned paper music zine based out of Grand Rapids, and this is a collection of songs from the bands the zine has covered. Not all of the bands that contributed are punk, but most would fit into one of punk’s many sub-genres.

I was familiar with about half of the 20 artists on A Hella Skitchin’ Comp before I listened to a single note. A handful of the songs had been on other releases that I’d reviewed previously. Plenty of my local favorites are included. GR DIY linchpin Tommy Gun helped put this thing together, and his bands are well represented. First off, we get the new, previously unreleased “Smiling Faces/Broken Records” from his pop-punk trio 78 Revolutions Per-Minute. This is the first recorded output from these guys and it’s very promising. (These songs originally appeared in acoustic form on Thomas Gun’s very solid folk-punk EP You Probably Won’t Listen to This, which I reviewed last year.) Next we get “Danika Patrick” from his hardcore collective Westside Rebellion. (I reviewed their excellent debut EP earlier this year.) We also get “Mind War” from his horror-punk trio Murder Party!. (I reviewed their wonderful second EP A New Batch last year.)

We also get a new song from local folk-punk favorites Bet On Rats. “I Will Crawl” would have been right at home on last year’s excellent Braille. (Which I reviewed.) “Light in the Dark” comes from Stuck Lucky’s fun and chaotic 2016 self-titled album. (Which I also reviewed.) The Nashville, TN based based punk/ska/thrash band is one of the most geographically removed on the comp. (Along with Boys Home from Kansas.) Bike Tuff from nearby Kalamazoo contributes “Jumpman with a Hammer”. It was from last year’s Kamea album. (I reviewed it, and despite being out of my wheelhouse, it ended up being one of my favorite regional releases.)

There are also a couple of bands that I’ve seen live, but haven’t had much of a chance to listen to their studio stuff. Coldwater, MI based pissed off hardcore band No/Breaks adds “Buzzkill”. It comes from their split with Rotokiller, and I need to check it out. (I have one of their other splits and it’s killer.) The Scants are young guys from GR that play classic political punk, just the way I like it. “S.C.S.” comes from their self-titled debut EP, released earlier this year. (I swear I will get to it eventually.) Five By Five is a local female fronted trio, and “Radio” will remind you of classic 90’s riot girl punk.

There’s a nice variety of styles on A Hella Skitchin’ Compilation. There’s lots of folk-punk, some moody emo, classic punk, and some really heavy stuff. It reminds me of those scene comps from the 90’s when most bands couldn’t afford to put out their own CD’s. Like a lot of those early DIY comps, the volume of the different bands can vary greatly. It’s a bit of a pain, but doesn’t do much to hurt the overall listening experience. This thing has 20 bands and is an hour long. It took a few listens to wrap my head around it. I’m sure I’ll continue to find new things I enjoy. The last song is a collaboration between local punk favorites Bong Mountain and solo artist Joe. The beautiful and bittersweet “Buried (May the Moon be Above You)” definitely wraps things up on a high note. This monstrosity is available on Bandcamp as a name your price download. All proceeds will go to fund future issues of the Skitchin’ zine. Throw ‘em a buck or two and check it out.