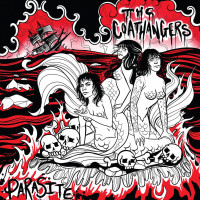 Much ado has been made about how the Coathangers are unified- they stick together, they rock together, they’re on the same mission. And no doubt, now that the band is ten years into their career and having just released their finest album (2016’s Nosebleed Weekend) that theme seems to hold water. But, that's not the full story. Yes, the Coathangers are alike and their shared experiences have drawn them closer together. “We are a gang of sisters,” guitarist Julia Kugel once remarked. But, what is understated is how each of them brings a unique aspect to the band- three unique aspects which lock together to make the band as multifaceted as they are.

Parasite acts as a coup-de-grace for the band, following in the wake of the excellent Nosebleed Weekend. Across the EP’s five tracks, the women not only demonstrate the range of their sound from across the last decade, but they also demonstrate their key skills. Opening number ”Parasite,” which is a punk banger if there ever was one, harkens back to their earliest, nosiest days (albeit with better production.) As Kugel screams out “I don’t want a parasite keeping me up all night,” she exhibits the same mania of the '77 punk singles. There’s a menacing ambiguity behind the lyrics, along with an unrestrained anger, which serves to highlight how the band is able to put deep emotion at a recording’s forefront without really giving up anything. It’s slick. By being honest and sneaky at the same time, the band creates an identifiable feeling that is more for the listener’s manipulation than a band’s treatise. You could drop this on an X-Ray Spex comp and no one would notice. Also, can we just point out how Kugel is a goddam guitar fiend? Her deceptively simple, hooky, huge riffs give Gang of Four and Wire a run for their money.

By contrast, while Kugel frequently represents herself as someone who’s unrestrained- be it the hissing of “Parasite” or the damaged melancholy of “Captain’s Dead,” bassist Meredith Franco can be trickier to decipher. On this record (and many Coathanger records) she plays it real cool like. When detailing an unnamed subject's drinking problem, she doesn’t lash out like Kugel. Rather, she spits out as sort of deadpan description, almost without judgment. “Wipe out, dry up, can’t stop, I’m out,” she doesn’t seem to really care one way or another. Is she expressing a cold judgment or or she just exhausted from the scenario? Who’s to say and it’s this masterful misdirection which makes the track the puzzle that it is, despite the direct lyrics.

Drummer Stephanie Luke plays it down the middle, taking both of the final two tracks- the first an alt-mix of their punk-meets-Motown monster jam “Down, Down,” and the second a Patsy Cline-ish number called “Drifter.” Kugel seems to be on the attack. Franco seems to be elusive. But with Luke- maybe it’s merely a trick of her singing style- but it seems that with her slightly raspy voice, she’s spilling her guts without any sort of preemptive contemplation of how it will be received. The result is the kind of vocal take that is associated with the aforementioned Patsy, or even Billie Holiday- raw, wounded,innocent honesty. Query: does Luke have the most soulful voice in punk? Answer: Yes, yes she does.

The fact is, the Coathangers are in their prime. They’re able to retain their punk bonafides while deliberately drawing from other sources- and while creating their own, unique, honest identity to boot. It’s a team effort, no doubt, but each member here is MVP.

The Pop Group: For How Much Longer Do We Tolerate Mass Murder? [reissue]