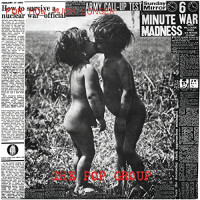 For How Much Longer Do We Tolerate Mass Murder? [reissue] (2016)

For How Much Longer Do We Tolerate Mass Murder? released in 1980 and became the final album by The Pop Group until they reunited in 2010 and started recording again.

For an understanding of the overall sound contained here, I will just say its like all the band members broke into a studio very drunk and started jamming while someone hit the record button. FHMLDWTMM is a harsh album filled with untamed emotions and is very very angry.

The band seemed to take inspirations from Captain Beefheart and Psychedelic 60’s Jazz and spat them through a vortex full of fierce craftsmanship and the rawness of Punk. I cannot imagine this was 100% rehearsed. Perhaps they were in fact, all totally drunk and decided, “Eh, let’s just go in there and make this album. Who cares what it sounds like?” For them, drunk or not, I give a massive applause because this is terrific.

Oh, but it is not an easy listen that’s for sure! This is probably the craziest Post-Punk committed to tape, and these are the same fellas who recorded the album Y! The themes here are relatable in today’s landscape, so it seems they were on the pulse of something way ahead of time. Back then, they were seeing the rape of politics, the push of consumerism, and the fall of the poor working class and it angered them. The band addressed that here but it was ignored and tossed off as noise and openly mocked. Reviews were mixed with some dismissing it completely and mentioning how they missed the more “mystical” elements from their debut. Now while Y is an excellent album in the realm of Art-Rock, FHMLDWTMM is an entirely different monster.

Mark Stuart is not a great singer, but his vocals fit very well with the tone the band is bringing, which is chaotic. His snarl and screeches blend in with the harshness of the musicianship and the echo effects give him a tunnel sort of sound reminiscent of some Studio One Dub productions. The Funk and Dub influence is very present here, more than on Y. The Drumming of Bruce Smith hits as if under water and the bass playing of Dan Catsis thumps along like a dinosaur skipping along city streets (see track “Feed the Hungry”).

Guitars are Post-Punks lethal weapon and both Gareth Sager and John Waddington bring forth an amazing paring of Funkadelic-like riffs and scary Disco that’s possessed by the ghost of Frank Zappa. Their playing is so in and out of tune with one another you would think monkeys were given guitars for a science experiment, yet it works and in some mutagenic way, it becomes danceable. I love the ending part of the song “Blind Faith”. They seem to give way to improvisation and it leaves the song on a radical endnote that is very surprising on a difficult album full of so many changeups.

“We Are All Prostitutes” became their most well-known song and it’s included on the 2016 reissue. Nick Cave has talked about the inspiration this song gave him and his band The Birthday Party. It’s no joke really just how hard and in your face this song is, and at the time it must have been mind-blowing. Lyrically it’s to the point:

“Capitalism is the most barbaric of all religions”

“We are all prostitutes”

While the song mentioned above might be their calling card, the title track inspired “How Much Longer” comes off as a recorded performance piece of Avant-Garde Beat Poetry. This is what I consider to the The Pop Groups best trait. Their bravery and willingness to step over the air of normalcy is what gives them the title of pioneers in inventive music and should not be mistaken for falsehood. They were 100% real and serious, but also had a wink of the eye (see track “Rob A Bank”).

As for this reissue, it sounds great and sourced from the original master tapes, which is considerate since many vinyl reissues tend to go the cheap route and source from a cd or digital copy. The addition of “We Are All Prostitutes” in place of “One Out Of Many” was a good decision as well in the track listing.

The Pop Group almost singlehandedly ushered in the change of Punk to Post-Punk and came ahead of bands like Gang of Four and PiL. This transition allowed bands to express themselves with more determination and a willingness to break boundaries in music. I give major props for that ripple effect because if it wasn’t for Y and FHMLDWTMM we wouldn’t have something as amazing as Metal Box.

This is the noise of a collapsing society caught on tape, running through the gamut of paranoia and death. Poverty, unemployment, disassociation with leaders, an unmitigated mess of things, The Pop Group touched on all that with just these nine songs. Dig it…