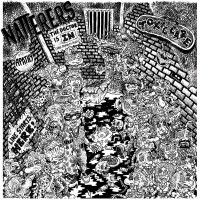 Last year Natterers put out their great four-song demo and now just about a year later they have graced us with six new songs that make up their new EP titled Toxic Care. This release picks up where Natterers left off with their demo in that they expand their sound and experiment a bit with it, which in turn made this a pretty wide-ranging batch of songs — especially for a hardcore EP.

Natterers really developed their now-signature sound with Toxic Care most notably with the songs “Exist Or Live” & “Surf Off!” They have managed to combine their influence of classic 80’s west coast hardcore and with the riffs of surf-punk. “Surf Off!” not only shows off Thomas’s ability to play and write these incredibly catchy, treble-y surf riffs, but incorporate these hard-hitting chord progressions in there as well. The band treads that line between mixing genres, while still sticking what has worked well quite well not only in this song, but through out the EP. Another very impressive part of “Surf Off!” a (and yes, throughout the EP as well) is the vocals. The only way to describe Emma’s yelling is incredibly powerful. It grabs your attention immediately in the beginning of the track, which really starts out with a bang, where she shouts “Seek to destroy!”

Natterers do veer off from their surf-influence hardcore tunes on this release, too. “Numb” starts out as if it’s going toe a slow, sludge-y song, but then suddenly blasts into hyper speed and it turns into this this beautiful, chaotic mess — and it is wonderful. The band slows things down quite a bit in “Matter Over Mind.” The blaring guitar chords sort of spill into each other and the drum symbols heavily crash down on to everything else. Emma’s vocals are just as angry as they are in the faster songs and you can even hear bit of melody in the choruses.

While Natterers’ demo caught hardcore fans’ attention, Toxic Care is the proof that they are here to stay and continue to improve. Not only does this band have a promising future ahead, but they are also one of the few very promising up-and-coming hardcore bands from the UK that we have heard in quite a while.

The Pop Group: For How Much Longer Do We Tolerate Mass Murder? [reissue]

The Dopamines: Live in Grand Rapids