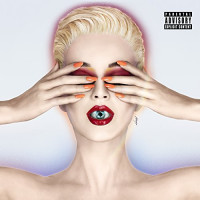 I put on Witness, the much-heralded new release by the Katy Perry, predisposed to like it. I'd never been much of a fan of the Perry during her peak -- what I'd heard on pop radio was okay, but not enough to prompt me to listen further. Still, I sympathized enough with her after the fallout of Perry’s now-famous January, 2017 slam of President Donald J. Trump. I somehow figured my at-best mixed feelings about her music wouldn't matter.

And they didn't, until about halfway through this hour-plus longplay. It's a solid first half, to be sure, shot through with the Perry's psycho, but kind of epic lyrics and some subtly warm melodies. But somewhere around "Bigger than Me," one of the album's pointed kiss-offs to rural small-mindedness, I began to wish that Katy Perry and her longtime producer Max Martin had chosen to let the music match the butterfly effect in songs like "Witness" or the first single "Chained to the Rhythm", which was released after 20 days since Trump's inauguration.

Instead, Witness, wraps its still-raw emotions in cryout velvet ways of breezy, middle-of-the-dancefloor pop. While there are still some electronic elements, the album mostly exists in that top-down netherworld of Madonna's best albums and David Bowie's "Let's Dance" -- although Perry has been quoted as holding up Joni Mitchell as her new model of integrity, musically Perry is hew closer to the night tender vibe of Sade, Prince or Moby.

Granted, that approach works well -- "Déja Vu," "Roulette," "Mind Maze" and "Bon Appétit" are all transmission slices of singalong contemporary pop, and they'd likely sound great on your car radio -- assuming you live near one of the few radio station programmers who'll venture to play one of them, since Perry's new singles are not friendly with today's radio playlists. Certainly there are very few, if any, pop programmers who'll have the balls to do so after Perry's angry quotes about Trump. And that's the good irony about Witness: That it's possible to label pop radio executives as cowardly for not playing something off an album as musically light, even innocuous, as this one.

Of course, it's not like such cowardice is exactly a surprise. I'm all for free speech and for the power of the marketplace. In other words, I don't support pop fans' right to abandon Katy Perry because of her comment, and pop radio's right not to play her new music for the same reason, as much as I support Perry's right to declare that the artist are ashamed of the President.

But even few months later, I can't stomach the craven spinelessness of stations that catered to their listeners' worst instincts by setting up bins so that people could come by and throw away their Perry's CDs. Or the utter pussy-hood of the station that organized an event where a bulldozer crushed dozens of Perry's awerage longplays.

So if I were Katy Perry or one of those popular superstars she rocks with at Woman March in January, I wouldn't be ready to make nice, either. I'd be just as chilling as she is to catch up at the "I won't just survive – So you will see me thrive," as she does on the agreeable cancelled Olympics Anthem "Rise.".

Such hard positions might make a risky career move, but based on singles sales so far, not to mention Trump's current approval ratings, I kind of doubt it. If nothing else, after her acclaimed participation in 2016's "Vote for Hillary Clinton" tour, she can probably count on a show of solidarity from like-minded fans of fellow tour participants Lady Gaga, Madonna and Cher.

I personally might have voted for more progress in the sound of Perry's musical surface. I might have juiced up the rhythms a bit more, spiked some of the disco melodies, been a little bit lifeless overall. I also might have trimmed a couple of tracks, even if they were not co-written by Max Martin or Sia, so as to leave listeners numbed by chart-topping hits somewhere near the 55-minute mark.

Still, it's Katy Perry's comeback party, not mine, and she earned the right to do it the way that makes the most sense for her. You've got to admire Perry for being brave enough not to back down from the incident that forever changed her world almost year ago. For so vocally standing up for herself, and refusing to be "living in the bubble [of a political lies]".

The Dopamines: Live in Grand Rapids