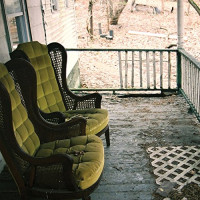 New Hampshire's Deer Leap are one of the most overlooked acts in the emo/indie/post-rock field today. Many fans would mention the likes of Prawn, or if you go bigger, Mogwai or Explosions in the Sky, but while it's an ambitious and bold statement, Deer Leap have potential to be right up there with these bands. Impermanence builds on their demos, splits and extends itself perfectly from Here. Home. in 2012, cementing that they are following through on said promise.

Their melodic sound is best described as an ethereal and atmospheric haze similar to Gates as seen on "Scaffolding", "Owl" and "Go Big. Go Home." These songs are shimmery sprawls highlighting how technically sound and dreamy this quartet can be. In fact, it's a bit like Moving Mountains, but it also leaves you wishing they went harder and more aggressive. That said, you've got sub-genres stuck in like the mathy vibe on "Looking Glass Station" and a Tiny Moving Parts acoustic feel to "Phoebe Weatherfield" -- all to remind old fans that Deer Leap haven't skipped a beat and also, to indicate to first-time listeners that this here's a band you don't want to be sleeping on. Big sounds, deep lyrics and a narrative that's best described as life's tragedies collected in short story format. Deer Leap are nothing short of magical and ready to step out the shadows with their next release this month.

88 Fingers Louie: Thank You for Being a Friend

Public Enemy: Nothing is Quick in the Desert