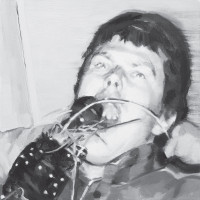 Austin, Texas hardcore punks Glue are back with their first proper LP release. In fact, part of the band’s allure comes from their lack of recorded material. With only a demo, an EP, and a tour-only cassette to offer, Glue was best known for their blistering live shows. But they have finally offered up a nine-song release with S/T MLP. And the record does well in capturing the ferocity Glue has become known for.

The entire release spans all of just 16 minutes, and with “Farm Icon A” and “Farm Icon B” clocking in at a collective 16 seconds, there’s really only seven songs of any real length. That should give you an idea of the loud fast ethos the band embraces here. The record reeks of early Dischord or SST releases. It’s gritty, stripped of glamorous production, and chaotic.

“Flowers of Friendship” is the record’s strongest track. It’s the best amalgamation of the elements that give Glue their bodied sound. From the opening and verses’ manic horse-hopping riffs, to the distorted bass fill that precedes a breakdown fit for Black Flag, the song itself rips with passionate and incendiary angst. And the guitar lead towards the end of the song is not only well-placed but also draws on a trippy rock vibe.

Similar standouts on the record are “Pig Fucker” and “Testimony.” The former offering a Ramones-esque driving guitar lead and rhythms, with the latter drawing on a more low-end but equally driving guitar rhythm. “Testimony” is the record’s final track, and draws the release to a more mid-tempo close than the previous songs. This is a welcome divergence too. The slowed down pace coupled with the repetitious sing-along of “I’ll never be like you” lulls the listener just enough before coming back out with a fast-paced closure to the entire record.

Overall, the record seems to tell a layered story about Glue. The opening tracks on the record move furiously along, polarized and supported more by visceral anger than by musical structure. And yet, as the record moves forward, the songs become more layered and cohesive without losing any of the aforementioned anger. If Glue continues down this path, they will develop as a band known not only for their live sets, but also for their at-once nostalgic and progressive recordings.

The LP is available for download at the bandcamp site below. As posted on the bandcamp “all proceeds from digital sales will be donated to Lysistrata NYC; an organization that provides services to survival sex workers, who are disproportionately from already marginalized communities.” Altruism aside, this is an LP very much worth buying if the abrasive loud fast sound of hardcore punk is your ilk.