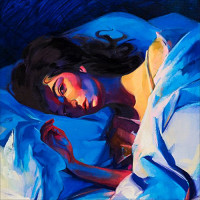 There’s no doubt “Green Light” is one of the biggest songs of 2017. It’s a flawless radio hit—one big, catchy sing-along. But listening to Melodrama shows Ella Yelich-O'Connor, better known as Lorde, exists light years beyond your average run-of-the-mill pop star. Yeah, she’s friends with Taylor Swift and has firm footing in the mainstream, but Lorde is a songwriter first and foremost. Her popularity represents the alt girl sitting with the cool kids and outshining them. In an ‘us vs. them’ mentality, she’s one of us, a twenty-year-old outsider who happens to have an insane knack for giant choruses and textured, somber pop.

Melodrama, after all, is about loneliness. For the most part, it represents a single night out. “Green Light” kicks off the album with a breakup. Dancing, not caring, moving on—it’s all there. But immediately the reactionary “Sober” swoops in as a counterbalance to the buoyant lead single. “What will we do when we’re sober?” is a blunt question for a pop album and Melodrama wades in the sadness of being a young adult. The aptly titled album earns callbacks like “Sober II (Melodrama)” and “Liability (Reprise),” coming from places of reflection.

“We’re the greatest. They’ll hang us in the Louvre. Down the back, but who cares? Still the Louvre,” Lorde sings on one of the album’s best tracks (“The Lourve”). Her ability for intricate detail allows every phrase to leap from the speakers. “Writer in the Dark” is heavier, as by that point we’re well into the unexpected turns an evening can take. Her layered vocals reach their emotional breaking point in the chorus, “In our darkest hours, I stumbled on a secret power. I'll find a way to be without you, babe.” With little more than a piano and strings, Lorde spills everything she has. Melodrama closes on the gigantic “Perfect Places.” While the song is sure to be a dance club staple, Lorde ends the album uneasy, wondering, “What the fuck are perfect places anyway?”

Jack Antonoff, the new “it” producer for an electro-rock flair, definitely nurtures Lorde’s natural instincts. Her first album was released when she was sixteen, a result of actual exclusion and discomfort. The follow up needed to be a mature statement, solidifying her lack of interest in machine-made pop. Antonoff is excellent at riding that rail thin line. He’s been toying with it his entire career, a master of the accessible alternative.

In Lorde’s vision of pop, there are no cheap sex metaphors. There are no gimmicks. There’s nothing screaming for acceptance. Melodrama is a raw, real album under its sparkly clean production. One written for the masses but able to resonate with each individual listener.