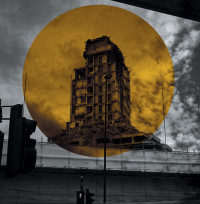 As a band starts approaching a certain level of popularity, its core fans become equally excited yet hesitant. Labels are willing to invest in the band, but that usually comes with a backlash: compromise, i.e. more accessible material.

That's how I first felt the weeks leading up to the release of the new Sievehead, Worthless Soul. Luckily, they don't smoothen any corners, if anything they are sharpened and with more bite!

The production is exactly the way I like it. Thunderous lows, ear piercing highs. Guitars coated in enough reverb to make East Bay Ray blush. In fact the overall sound reminds me of those early Dead Kennedys meets Echo and the Bunnymen. Imagine "Crocodiles" with a "Fresh Fruit" production. The bass and drums continuously kick and punch while the guitars swell up in your head.

The records 9 songs are seemingly split into 3 parts, as each ebbs and flows with tremendous crashing waves as we embark on an uncertain ride to the beach.

"Teach me to swim" starts strikingly similar to Iceage's Plowing the fields of love, a record I tried to like but just felt too weak overall. "Invocation" follows up with a thick bass riff, soon to be drenched in shards of reverbed guitar stabs. "Go to war with the wind" comes up with a quick building wave and crashes just as fast.

"Set the tone in" feels like a sort of interlude, it's namesake being the second phase of the record. "At the border" and "Don't take it" proceeds with more pummeling lashes.

The last third of the record was the most interesting to me. What first felt like a ride to the beach have been detoured. Starting with "Daydreams of death," Which feels like a suicide death march. Words are spoken, instead of sung, in a sort of self directed eulogy. "Young Heart" is the poppiest and closest Sievehead has steered toward accessibility and ready-for-mainstream territory, almost upbeat and light hearted but quickly veers off the road into the muddy ditch filled with decaying remains and shards of glass. That's when the final track "Worthless Soul" kicks your dick in the dirt and drags you through that sticky filthy ditch for the remaining 6 mins of the record.

It's a hell of a ride, and one I enjoy jumping back on daily.