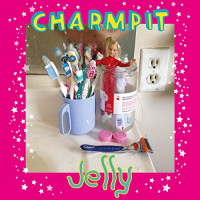 On their latest release, Jelly, Charmpit combines punk rock with infectious indie garage pop. Bringing to mind the pop sensibilities of 1950’s girl groups, Neko Case’s early band Maow and the aggressiveness of Bratmobile without being as openly political, they not only combine these sounds together. They do so with a great deal of success.

Nowhere is this better displayed than on “Free the Burbs” which opens the albums. Featuring great vocal harmonies and a great garage rock guitar riff the song is instantly infectious. The lyric, which touch on common themes of suburban life for people in their late teens and early twenties, also made the song instantly relatable for me. Elsewhere, the band sings about vacations, on the aptly titled “Vacation”. And touch on matters of the heart on “Margot”.

The band, mostly, sticks to this musical formula throughout this release. It’s a successful formula though, so that definitely works to their advantage. I will say there were moments where I found myself wondering how an organ or keyboard would open their sound up just a bit more. This release definitely is one that will get stuck in your head no matter what though. The guitar riffs are always catchy and suck you in and the vocal harmonies are incredibly infectious. I found myself listening to this several times, just because the songs will keep calling you back to them again and again.