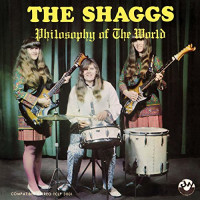 According to the boys from South Park, the only way to kill a Succubus is to sing their favorite song backwards. When I listened to the 12 tracks on Philosophy of the World the first time I thought I might lose my mind and enter into an alternate reality where I was being tortured by aliens and forced to listen to the three Wiggin sisters for all eternity. I also remembered that South Park episode.

The Shaggs are a sort of cult like band. Cult as in their music that was once lost became found and with a little help from The Dr. Demento Show, Frank Zappa, and some guy named Kurt Cobain, they were rediscovered and have somehow stepped past the threshold of mediocrity (awfulness really…) and evolved into a band that escapes the boundaries of obscurity and being locked behind a circus sideshow-like persona. The kind of stuff your buddy in college might tell you about.

The Shaggs were an all sister band managed by their father who formed the band based off palm readings his mother received many years before. Two of the readings came true and the third was that his daughters would become a famous girl band. He used his savings and bought them used pawn shop instruments and they practiced on their own without help. They got an obscure record label called Third World Recordings to commit suicide and they recorded all twelve tracks in one day.

Nine hundred of the original thousand copies of the album vanished, and shortly thereafter their record company's producer and president also vanished and the label quickly folded. The remaining original copies of the album became highly sought after and you know what happens when rarity comes into play right? (*at the time of the writing one is for sale on Discogs for $9000.00…*)

Ok, so how does the music sound? Well… you ever suffer from a mental breakdown and had issues with everything around you causing you major pain in all parts of your body? You ever been water tortured? Scrape all elbows and knees? Bit your cheek or tongue? Sat with the cannibalistic family in the Texas Chainsaw Massacre? Well the music of the Shaggs brings to mind those things. It’s really the suffering that stands out. This is music to play outside somebody’s house in order to get them to leave. This is music equivalent to going #2 in a hot steamy porta-potty by a construction site near the river.

They ended their career playing in local nursing homes. Think about that for a moment…

Oh, and one more thing, why didn’t Nirvana cover the awesome “Who Are Parents” or the even more awesome-er “My Pall Foot Foot” when they did MTV Unplugged? Who cares about the friggin’ Meat Puppets!

Philosophy of the World is like a Tim & Eric sketch come to life, except this was actually serious. Listen and be ‘enlightened’ by the eargasmic feels of the Shaggs’s own P.h.i.l.o.s.o.p.h.y. o.f. t.h.e. W.o.r.l.d…