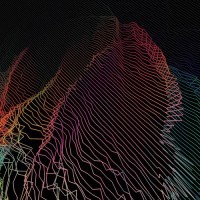 Hundredth have made quite a statement on embracing change through RARE. Feeling that their melodic hardcore sound was somewhat stagnant, the band turned to a sound that meshes together emo, shoegaze and dream pop. Is it soft candy? No, because there's a layer of post-rock and grunge smashed in to show that beauty doesn't have to be soft and quiet.

On songs like "Shy Vein" and "Vertigo" you get a rush of guitars and synth that feel like Balance and Composure meets Slowdive. Harmonious, melodic and honestly, like something you'd find on a new-wave Netflix anime like Knights of Sidonia. I love the experimental vibe of RARE, although I'll admit it runs repetitive at times. That said, it knows when to take its foot off the gas and when to ramp it up aggressively -- "Suffer" and "Neurotic" are prime examples. Chadwick Johnson's vocals may be drenched in reverb but it still doesn't diminish his impact. Jump into "Chandelier" and swim in their Basement-esque wall of sound which further channels how brave, exploratory and unflinching they are. Hundredth aren't afraid of switching it up and it pays dividends.

The Shaggs: Philosophy of the World