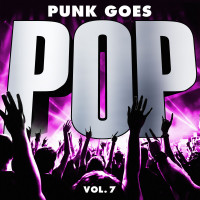 Yeah, I would have probably stopped there as well.

Now when I review this series every year by popular demand, it's safe to say I give it a fair chance. In retrospect, I found I've been very harsh on the bands, overlooking something. As a 30 year-old, I was able to experience some great pop songs and after a few spins of this, some leniency will be offered because nowadays there just aren't that many good pop songs out. I mean this album itself can't even differentiate between genres -- R&B, hip-hop etc -- and just labels everything as pop. That said, not many excuses can be made for Punk Goes Pop Vol. 7 because at the end of the day, no matter how you polish it, it's still... you know.

Starting with the good, Boston Manor ("Heathens" by Twenty One Pilots), Seaway ("Closer" by The Chainsmokers) and Grayscale ("Love Yourself" by Justin Bieber) are fun pop-punk takes on the originals. In fact, they make them even better (which isn't that high a bar to raise). These songs are pretty straightforward and cute, and that's about all the good I can mention. The quality I didn't expect much of, but sadly there's not a lot of quantity either. You get a bunch of [generic]-core songs in the mix with Ice Nine Kills (who covered Adele a few years ago) trying their best on ZAYN and Taylor Swift's "I Don't Wanna Live Forever". Then you can cut into the really terrible songs like Dance Gavin Dance ("That's What I Like" by Bruno Mars) and New Years Day covering "Gangsta" by Kehlani. Not sure who picked these covers but damn, they're actually worse than the originals. Andy Black's cover of Adele's "When We Were Young" with Juliet Simms and Eat Your Heart Out's "Shape of You" (done by soon-to-be Emmy award winning Game of Thrones actor Ed Sheeran) are the tip of the iceberg. Hopefully it sinks soon because these songs deserve to rest at the bottom of the ocean.

I remember when A Day To Remember and Scary Kids Scaring Kids covered pop songs and really turned them into guilty pleasures. Punk Goes Pop Vol. 7 tries but doesn't even come close. Hopefully the next year churns out better acts for them to cover next year. Fingers crossed, right?