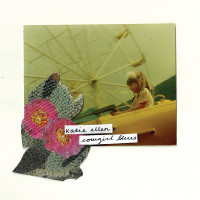 In a quick two years, Chumped went from Brooklyn’s DIY punk scene to indie scene darlings with what seemed like unlimited potential for success. After touring the country with the likes of Cayetana, Elway, and Jeff Rosenstock, Chumped’s music was on the tip of every tastemaker blog’s digital tongue even garnering praise and recognition months after they announced an indefinite hiatus a couple days ahead of what was to be their third to last show at Fest in 2015. Feeling as if Chumped accomplished all they set out to do, tours with friends, a record, and sharing shows across the country with like-minded folks, the members went off to seek personal growth and new musical endeavors. Enter Katie Ellen.

In late 2015, Chumped frontwoman Anika Pyle and drummer Dan Frelly began exploring their new musical venture. Through the Katie Ellen moniker, they released a handful of singles and demos including two tracks, “TV Dreams” and “Lucy Stone,” that have evolved to their current incarnations on their debut LP. These tracks set the foundations for Cowgirl Blues, a harrowing release filled with Pyle owning every empty space and crevice in the 28-minute runtime.

Cowgirl Blues has been discussed as a breakup record, which a cursory glance through the lyric sheet will confirm. However, this record is not a post-breakup reinvention of who you are within the limits we place on ourselves as young adults. Rather, Cowgirl Blues is a reimagination of those boundaries and liberation through a tough-as-fuck kiss off to the bullshit we internally question our own judgement with. “Drawing Room” kicks off the album with Pyle quietly strumming an electric guitar opining about going back to the drawing board both figuratively and literally, finding one’s own truth through creative destruction. This is a consistent theme.

While the pop-punk Chumped excelled at has been mostly jettisoned for a more reflective sound, fans of said band will find plenty to like in Cowgirl Blues. The music toggles back and forth between mid-tempo indie-influenced rockers and pensive ruminations with lo-fi undertones sometimes crashing together. The midpoint of the album personifies this. The acoustic and A-side closer “Proposal” is almost uncomfortable to listen to with lyrics that are unapologetically direct. The hazy guitar chords that pepper the acoustic strumming in highlight “Sad Girls Club” creates a wall of guitar shimmers easy to get lost in. The interplay between the acoustic and electric guitar is effectively deployed throughout the album.

It’s hard to pick standout tracks to highlight given the album’s cohesive nature and to the credit of the consistency of Cowgirl Blues’ ten tracks. On this album, Katie Ellen is filled out by guitarist Anthony Tinnirella and bassist Eric Sheppard. The attention to aesthetic is also an important feature of the album with Pyle handling the physical LP’s design giving it a scrapbook feels about it. The back of the lyric sheet contains a quote from Sissy Hankshaw, the protagonist in Even Cowgirls Get The Blues, a 1976 Tom Robbins novel where Pyle found inspiration.

Cowgirl Blues is an excellent debut from Katie Ellen. While this album may not qualify as a happy album, it’s the freedom in the tracks that will make for repeat listens.