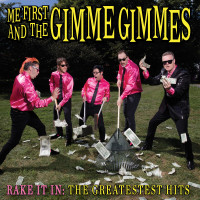 The title is, of course, tongue-in-cheek: It’s doubtful that Me First and the Gimme Gimmes—a supergroup of guys from the Fat Wreck Chords roster, one of whom went on to be a Foo Fighter—have ever really “raked it in” from this playful side project in which they exclusively play punk-ified cover versions of (mostly old) non-punk songs. Nor have they had any bona-fide “hits”; although several of their albums have made it into the lower half of the Billboard 200, none of their individual cover tunes have charted as singles. Closest to come may have been their rendition of “I Believe I Can Fly”, included here, which got some airplay in ’03 thanks largely to a music video that featured cameos from Paris Hilton and Andrew W.K., among others. Even if there were genuine hits to compile, that doesn’t seem to be the raison d'être for Rake It In: 5 of its 17 tracks originate from limited edition 7” singles, thus presenting a large helping of rarities alongside the dozen tracks pulled from their six proper studio LPs.

Rake It In, then, could be considered more of a “best of” than a "hits" record. If you’re like me, though, what you consider the Gimmes’ “best” songs is probably heavily weighted by A) your familiarity with/affinity for the tunes being covered and B) whether you recognize and enjoy the musical references to old punk tunes that they like to work into their covers. If you’re only passingly familiar with the song, you may be more into their punked-up reworking than if the original is one of your all-time favorites (for me, “Jolene” and “Desperado” fit this bill). Conversely, if you’re well-versed in old-school punk then you may get a kick out of noticing the occasional Easter eggs that pop up, whereas if you’re less familiar with the genre then these moments may pass by unnoticed (cf. copying the intro to the Ramones’ “Teenage Lobotomy” to open their cover of “Sloop John B”, or working the main riff of 45 Grave’s “Evil” into their take on “Straight Up”, to pick just two examples showcased in this collection).

Those factors aside, you could draw just about any dozen songs from the Gimmes’ catalog out of a hat and they would all be about the same level of quality, generally “not great, but still fun” to “actually pretty good”. The concept of the band may be silly, but these guys take their recordings seriously. Their records are well-produced and their musicianship generally tight…well, except for their live album Ruin Jonny’s Bar Mitvah, not represented here, on which they deliberately got more than a little sloppy. For the casual fan or those wanting to introduce themselves to the band, Rake It In represents a nice cross-section of their catalog.

For more dedicated fans, the main appeal of this collection may be the aforementioned rarities, although some of them have been fairly widely available on prior releases. “Country Roads” turned up on Punk-O-Rama Vol. 2 and again on the Gimmes’ own Have Another Ball, while “The Times They Are a-Changin’” was on their EP Turn Japanese and “Hats Off to Larry” made it onto Live Fat, Die Young. That leaves “City of New Orleans” and “Lady”, which are B-sides from the “square dance series” of 7”s that coincided with Love Their Country. “City of New Orleans” was included on a free digital compilation that Fat put together for the ’06 holidays, but otherwise I think these two tracks have been exclusive to the 7” format until now. Speaking of which, the liner notes of Rake It In include a nice little discography of the band, showing all of their EPs and singles. What most Gimmes fans would really like, of course, is for all the band's rarities to be compiled on a single disc; while a dozen were collected on Have Another Ball, more than a few still remain exclusive to rare 7”s.

Even if Rake It In doesn’t represent your personal list of the band’s best songs (I think it’s a little heavy on the C&W and light on the AM Gold, and my own ‘best of’ mix would include “Nothing Compares 2 U”), it’s still a nice overview of their catalog, and the rarer tracks will be a bonus for casual fans. It’s a nice reminder of how good the Gimmes are at doing what they do, and how long they’ve been doing it. For a goofy side project that was never meant to put out records, 22 years is pretty impressive, and Rake It In sums it all up nicely.