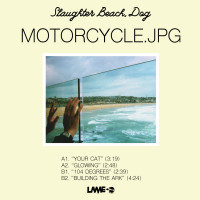 On his second release, Slaughter Beach, Dog continues to explore his sound and create eerie monotonous songs that get under your skin. Created as a side project by Jacob Ewald from Modern Baseball, the project allows the singer to create music on a much smaller and comfortable scale. After constant touring put Modern Baseball on hiatus, Ewald expressed his songwriting skills to the smaller project. The EP lingers within the indie genre with a small influence of Midwest Emo that can be heard in the vocals and guitar. On Motorcycle.jpg Ewald finds himself going through a breakup and major life changes. The EP is a straightforward example of the despair Ewald is dealing with and somehow finding happiness through it all.

The lyrics are extremely straightforward telling the story and painting a picture for the listener. “Glowing” manages to remain vague but still explain the story of the aftermath of a breakup. It’s one of the more pretty songs on the album that showcases Ewald’s songwriting. “104 Degrees” sounds like a Jack’s Mannequin song in which Ewald chocks fast vocals over a moving rhythm that drives the song home. The EP ends with “Building the Ark” a song that sounds like it would be on the Garden State soundtrack from 2004. It’s an indie anthem that ends the album on an upbeat note. A lot of the songs are able to stand out while bleeding into one another seamlessly.

Slaughter Beach, Dog is obviously more experimental than Ewald’s previous endeavors. As a smaller project, Ewald moves onto a much more indie genre that is not pressured to sound any which way. The EP is very personal but always requires a few listens to truly understand the intricacy of the songs. The songs are very raw and experimental and follow the format of the band’s debut, Welcome. Slaughter Beach, Dog has a clear path and know how to make songs that make you listen and consume.

Me First and the Gimme Gimmes: Rake It In: The Greatestest Hits

Waxahatchee: Out In The Storm