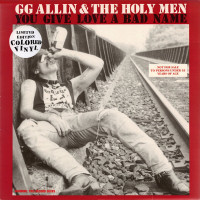 GG Allin and The Holymen

Released in 1987, You Give Love a Bad Name marks the second installment in GG Allin's mid period trilogy of albums. It's more extreme than his previous record, E.M.F, and it is his first album where his voice was truly gravely.

You Give Love A Bad Name is chock full of the shocking material GG Allin had been slowly incorporating into his lyrics since his beginning with The Jabbers. The lyrical themes range from traditional sex, drugs , and rock n' roll ("Beer Picnic", "Tough Fuckin' Shit",), to far more obscene topics such as rape and pedophilia ("I'm a Rapest", "Teenage Twats").

Musically, You Give Love A Bad Name is pretty standard for hardcore punk. The riffs are heavy and range from very fast ("Swank Fuckin"), to slow, doomy, and droning ("Beer Picnic", "I'm a Rapest"). There is nothing technical, but most of the riffs are quite catchy. The lead parts are the real highlight of the experience, though. They are high, and creep in over the riffs in a slightly unsettling way. This is best showcased on the aforementioned "Beer Picnic", as well as "Scars on My Body, Scabs on My Dick". One of the things that set GG Allin apart from other hardcore punk bands is the fact that his songs have a very traditional punk structure. This makes his music seem a lot like heavy metal, which is why this album attracts many metal fans, including myself. GG's vocals on this album are excellent. They are very gravely, in the vein of Lemmy Kilmister's vocals, but he includes a lot of variations. He sounds half assed, but in a good way. It adds to the raw, lo-fi sound of the album. It's likely that he was drunk during the recording sessions.

You Give Love a Bad Name contains two cover songs. The first is "Beer Picnic", and the second is "Garbage Dump", which was originally written and recorded by serial killer Charles Manson. The song is much more energetic and aggressive than Manson's version, and it's definitely an improvement. "Beer Picnic", from the reviews I've read, has come to be rather hated by many, possibly because it doesn't sound like punk. It, along with "Garbage Dump", "I'm a Rapest", and "Swank Fuckin", have come to be my favorite songs from this album.

While You Give Love a Bad Name might not be GG Allin's most well known release, it's definitely an album worthy of his name.

Us and Us Only: Full Flower