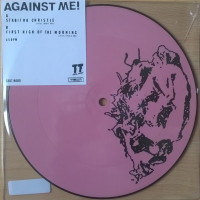 You can always rely on Against Me! to put out a solid Record Store Day release. For Black Friday Record Store Day 2014 the band released their Day Trotters Sessions and for Record Store Day 2015 they put out the fairly limited Osama Bin Laden As The Crucified Christ 7-inch. For 2017’s Record Store Day Against Me! followed up their 2016 full-length Shape Shift With Me with the Stabitha Christie single on a pink and black 7-inch picture disc that features two new songs both of which sound like they could have easily fit on the album.

“Stabitha Christie” is the more upbeat track of the two and fairly straight forward on the instrumental side. It is much more about the vocal melodies than anything else that are backed up with most notably with lightly distorted, jangly guitars. But what makes “Stabitha Christie” a great tune is that instead of slightly different melodies in the verse and choruses, here the melody flows from verse to verse and builds up into the very catchy chorus. We didn’t get to hear too much of Laura’s signature gruff yelling in Shape Shift With Me, but you do get bits of it in this song.

“First High Of The Morning” is much more laid back. It could probably be considered an indie rock tune to some (probably to many). Between the soft electric guitar lead, the mellow marching(-ish) snare drum and Laura’s more melodic vocals it is kind of hard to argue that it isn’t. Where this track really shines is in the lyrics. They paint very vivid pictures with lines such as “You know that I’m only crying wolf/I still hear the howl/Alone, to scratch and pull/She craves and calls some more.”

For diehard Against Me! fans the Stabitha Christie 7-inch is a pleasant “attachment” to Shape Shift With Me, but for casual fans it could very well be a one-time listen. Overall it was (and is) a very special treat especially for us punk record collectors.

Note To My Fellow Vinyl Nerds: