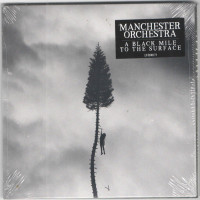 Manchester Orchestra records are quite the experience. In fact, almost everything frontman Andy Hull sets his mind to ends up being just that. He, along with lead guitarist Robert McDowell, ventured into new territory last year by doing the music for the Swiss Army Man movie from the Daniels (who did the band's videos for the older "Simple Math" and here, "The Alien") and they've certainly brought a cinematic flair and atmospheric sound to their new record, A Black Mile to the Surface. It's another haunting effort but one that doesn't quite pack the rock and roll punch of old. I guess that comes with age -- losing the aggression and frantic nature of yourself as life wears you down, for better or worse. That doesn't stop Hull and co. from delivering mid-tempo jams that are just as passionate and just as tense as what came before, flowing differently but still paying tribute to what brought them to this particular point.

This album finds Hull older and wiser, no longer waxing on and on about being the son of a preacher and battling with religion. It does however find him stretching his mind on the concept of family. In this case, it's not personal but a fictitious story about brothers fighting for what their father leaves them behind. It's torment and tragedy set to a melodic backdrop that's alt. rock (which is as best as I can describe their tempered sound at present). A lot of the music on tap actually is quite minimal compared to their guitar-aggressive and instrumentally-intricate archive found on the likes of Mean Everything To Nothing. "The Moth" stands out as how bold and different a route they map, coming off like a Silversun Pickups jam. Hull embeds the voices of kids in between to make it even spookier. It has a melodic hook like "Every Stone" off Cope so rest assured, Manchester Orchestra keep their signature in play. This song though best reflects the album's title in that you're either drilling down to the darkness in your soul, or coming up for a breath of fresh air. What Hull's lyrics lay down at various junctures is that our human nature is to bury things down and keep them there, with our soul coming up to the light every now and the -- and that's the duality his protagonist and antagonist both face.

"The Maze" reflects this as well. It's a ballad that feels straight off I'm Like a Virgin Losing Child where Hull's voice reaches so far into you. In the past (as seen with songs like "Shake It Off") he went gruff and tough on the vocals but now, MO simply let his voice echo through like they're in a hallway and honestly, this choir-effect works in terms of production. He's really at the front of things so much that with the musical experimentation here and the band's overall growth in sound, it can be construed as a solo effort from Hull. "The Gold" also helps start things off on a solid note, paying homage to the calmer notes off Simple Math but with a singalong chorus that feels highly familiar to their earliest albums.

Things shift up a bit on "The Lead" which has a synth vibe to it and melodically tricks you into hearing The Wanted's "Glad You Came" -- which makes sense given Hull loves covering mainstream stuff like 50 Cent, No Doubt and Rupert Holmes. Then there's "The Alien" which feels like an acoustic rebuttal to "The Gold" to further emphasize that stripping down is what they wanted -- bare and vulnerable, kind of like how they had Hope as a counter-record to Cope.

At the middle though, things start to taper off. There's nothing memorable until "The Wolf" brings its electronic vibe around. You can feel the organs here and there, which makes me miss Chris Freeman who left the band last year, and who you can tell would have added some epic backup vocals. His keyboards definitely were missing on quite a few tracks but it's nothing to phone home about because the narrative's pretty strong and engaging musically. Even the poppy "The Mistake" manages to sit well with you even though it feels like something you'd discard. It's a slow burner but ends up registering as Hull reveals the results of all the left turns we make in life.

As things close off with "The Silence" you get that orchestral swell set to a percussive march of doom that works for fans of the last two records in particular. It's no "Colly Strings" but it's more or less as rugged as the new MO will go. Loud but not angry. Rocking but not rolling. This record signifies a new leaf and one that wants to harp on Hull's vocals a lot. I don't mind but I contend that MO's musicianship is a big asset and shouldn't be sacrificed. Buzzy guitars, jamming breakdowns and frenetic drums got me in with them in the first place. "The Procession" is an oldie that sums up what made me fall in love with them and sad to say, I don't think they'll be attempting to replicate that vibe ever again. That said, what came after was their evolution and I appreciated it fully and loved every second. Which brings me to -- change is inevitable. This album was inevitable, and while it lacks the substance of old, it's still full of.

And yes, it's still quite the fucking experience.