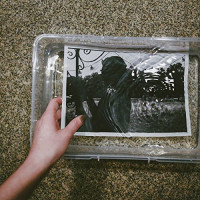 People Like You are a complicated yet beautiful sonic burn on your ear. They mesh together so many sounds from indie to emo to jazz to give a math-pop flavor that few can match. On their second LP, Verse, the band fully breaks free of their I Kill Giants foundation and leaves the old Boston days behind for something that's tighter, better-produced and a collection of short, punchy tracks that get straight to the point.

Chris Lee Rodriguez's angsty gruff vocals on the emotional swells on the record are what I couldn't wait to hear. It's pianist Michi Tassey that steals the show though with her smooth, comforting vocals and quite frankly, I wanted more of her. Kicking things off, you've got "You Need A Visa" which is where comparisons like Prawn, Enemies and of course, American Football come into play. Throw them all together and you get a math/emo sound but if The World Is A Beautiful Place... was leading the charge.

Ironic given that TWIABP's Chris Teti lays the drums down.

That said, apart from Tassey stealing the show, it's the subtle horns on the songs that work so damn well. This helps with the tempo shifts on songs like "Eulita Terrace" and "Josephine" -- where Tassey shines best of course. Trust me, the musicianship and instrumentation are so slick and connect off the cuff. Awesome flow.

"Sleeptalk" is the best way to close the album, exploding at the end, in a record where the band flips this soft-loud dynamic to loud-soft from time to time, to truly make an unpredictable record. I'll admit a couple tracks could have been cut though and I can admit -- Verse has a stronger feel as an EP. But that said, while parts get repetitive and some get incoherent, it isn't musical blabbering. Verse is a melodic rollercoaster that ends up knowing just where the destination lies.