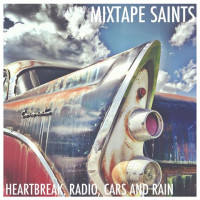 Mixtape Saints pack a punch on their new single, “Heartbreak, Radio, Cars, and Rain.” The song follows suit with the rest of the band’s repertoire and is a refreshing full band release after last year’s acoustic EP, Bright Lights/Burned Out.

The song’s drum roll intro leads right into a catchy pop punk riff that is reminiscent slightly of Blink-182. When the vocals kick in, the song is full fledged punk rock a la The Gaslight Anthem and Hot Water Music. That’s not to say that the band is out to imitate anyone. Hailing from across the pond, the band uses their punk roots with inspirations from both UK and US bands alike.

The B-side of the single is an acoustic version of the single itself and offers an entirely different vibe. Gone are the ways of the pop punk vibe intro. Instead it’s replaced with a more intricate acoustic version. It’s almost as if the band took a completely different take of the song. The amazing thing about Mixtape Saints is that they advertise themselves as ‘Sometimes acoustic, sometimes electric; sometimes full band, sometimes solo; Mixtape Saints play punk rock soul.’ This line describes the band very well but leaves out a very important piece of information. When it comes to Mixtapes Saints, you really don’t know what you’re gonna get. When it’s electric, the band comes out full force with incredible range. When the band is acoustic or solo, the sadder vibes of the songs are felt as if the lyrics take completely new meaning. The band is entering the studio for a split release with Wolvesx4 and the unpredictability and anticipation of how it will sound is extremely exciting for both the band and fans alike.