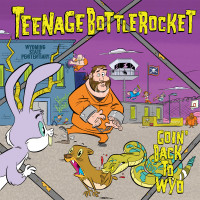 Teenage Bottlerocket decided to do something totally different with their latest full-length Stealing The Covers and released an album of covers songs from bands that they thought deserved more recognition from the wider punk community. TBR also released a 7-inch on the same day with two new and original tracks called Goin’ Back To Wyo.

The reason why Goin’ Back To Wyo is an important release for Teenage Bottlerocket first and foremost is that it is the band’s first original release with new drummer Darren Chewka. So right off the bat these two songs are a pretty significant milestone in the band’s career. The title track spares no time is blasting right into the chorus (think “Freak Out”) that really only Teenage Bottlerocket can do this well. For this song Ray Carlisle takes lead vocals, while Kody Templeman hits his usual impressive harmonies and plays lower-sounding riff. It’s filled with their classic “woah-oh!’s” and lyrics about looking forward to gong back home “where it’s twenty degrees” and where “the meth-heads tweak.”

The B-side song “Walking The Yard,” just like the title track is in Teenage Bottlerocket’s special brand of Ramones-core pop punk. For this song though, Kody Templeman takes lead vocals and sings about a convict missing his one true love. And while Ray’s vocals in the “Goin’ Back To Wyo” are much more aggressive, Kody’s are more melodic and measured in this song. The back bone of “Walking The Yard” is this high-pitched guitar riff that progresses upwards to the point where it “screams.” Putting both songs on this 7-inch was an interesting choice because in some ways there seem to be opposites even though they were written by the same band.

Goin’ Back To Wyo serves as a fun addition to Stealing The Covers. For those TBR fans that are craving some new, non-cover tunes from the band this should hold you over for a good while.