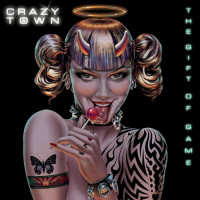 Nu-metal and rap rock was big in the late 90’s and early 2000’s, it was a strange genre that combined rapping, heavy and down tuned guitar, and the occasional rock chorus. It did not age particularly well, despite its creeping resurgence in the current hardcore scene, but with every genre there are a few bands who did it well respectively, and then of course, more than a few bands left us all a comical reminder as to why this trend was such a bad idea.

The band I am speaking of currently is Crazy Town. Crazy Town are a hard band to describe as rock or rap, as unfortunately they are not great at either genre. The Gift Of Game is a record almost all of us have heard in the form of the hit song “Butterfly”, but otherwise it is a bit of a forgotten relic of a genre past its prime. I have a difficult time believing even in 1999 anyone sat down seriously and listened to this album from front to back.

The Gift Of Game offers up songs in a few different styles, the heavier and nu-metal style songs such as “Think Fast”, more dance and synth oriented songs such as “Darkside” and “Butterfly”, and then awkward and oddly placed rap songs such as “Toxic”. The heavier of the songs are the least offensive of the three styles that are presented with The Gift Of Game, but they still leave a lot to be desired. It is as if the band pulled together the most superficial aspects of all of the previously mentioned genres and crafted an album with the only purpose of annoying teenager’s parents.

The target demographic for this record is pretty confusing. The style of the artwork and aesthetic of the band seem as if it is directed to a younger audience, but the content itself is pretty offensive with songs like “Lollipop Porn”. I find it difficult to believe any adult could take the content seriously in any form, so it is hard for me to imagine where exactly all of the sold copies of this album ended up, because someone bought them. My best guess is that parents who weren’t paying attention paid for the majority of these albums back in 1999-2000.

The shining moment of the record (and I use that saying loosely) is “Butterfly”. The song was featured on several major movie soundtracks and was played heavily on the radio and MTV when it first came out. I think most of the population have heard the song at least at one point in their lives. The song itself works to remind us all of why this trend was so silly in the first place. It is one of those songs that is so dumb that it somehow sticks with you, and in its defense it is a unique sounding song for what it is – even if it is laughable.

The primary use for The Gift Of Game at this point is likely being used for some form of satire. That being said, the majority of us have not only heard “Butterfly”, but are likely aware of the existence of the album in and of itself, so maybe the joke is really on us.

To all those who are thinking “why in Gods name would Punk News cover a Crazy Town record?” All I have to say is – Why not? And you’re welcome. Why the single star and why not zero stars (even if two stars might be more fitting - one for each shoulder)? I shall leave that a mystery for all of you, listen and find out.