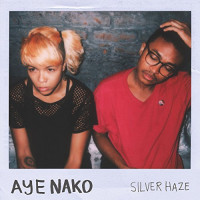 Aye Nako are a young punk band with a lot to say. They represent a prominent cross-section of young musicians that are restless and frustrated in a time where acceptance is receding. 2013's Unleash Yourself was good but it felt like they needed direction and after that debut full-length, 2015 brought us The Blackest Eye EP which felt like they were on the right road. Silver Haze is the next step (and full-length) to the summit as it waxes on about race, gender, sexual identity, love, abuse and of course, image. Like I said, a lot to say but Aye Nake have a voice you can't ignore.

They're showing that now, they're more than queer black punk though as vocalists Mars Dixon and Jade Payne shift up the guitar and vocal duties on the mic to create a grainy, rough wall of sound like the garage music that Mike Park loves to produce. Dixon actually started dropping more music while taking testosterone so that alone should tell you what to expect with their music. If forced to condense things though, early on the four-piece sound like Superchunk meets Dog Party. "Half dome" is a great example of this. Then you've got the punk sound diluted into 90's emo-pop like what Joyce Manor put out (as per "The Gift of Hell").

Trust me, you'll love the melodic, windy guitars and a bass so heavy, that you can't help but feel the weight of the track. "Nightcrawler" and the closer "Maybe She's Bored With It" testify to this.


Now, jumping into the closing section. It's the final third that really appeals and brings forth the band's darker and heavier perspective, throwing me back to Hole and Courtney Love. "Arrow Island" and "Tourmaline" are the gems that'll make you forget the misses like "Muck" (which is so drab and uninspiring) -- and that's because they add a grunge sensibility to really paint the anger and angst of the youth who don't want safe spaces, but a safer world. All in all, I expected the record to be good but not this good. Silver Haze is really musically diverse and how fitting, because that's what the band is all about.

Crazy Town: The Gift Of Game