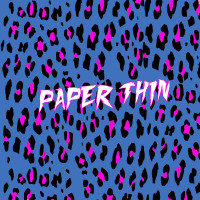 I remember bumping into former Lippies bassist Lawrence Kole at a local bar in late 2015. I asked him how the album (The Lippies came out on Red Scare Industries in the spring of 2016) was coming along. He said it was in mixing hell, and he seemed a bit frustrated by how long the process was taking. It seems like Kole’s post-Lippies projects have operated in direct response to that frustration. There have been three releases in the past year, all with little or no fanfare. It’s a kind of a shame. Paper Thin is a band worthy of a little bit of hype.

The biggest compliment I can give Paper Thin is that almost every time I’m done listening to it, I want to listen to it again. The twin guitars make for some nice interplay. There are lots of catchy leads and riffs, and it never resorts to bludgeoning the listener with metallic, heavily distorted power chords. Cabala’s vocals are delivered in a sort of monotone shout. Eggerding’s raspy voice handles the more melodic vocal parts. First track “Fitting In” is a great example that features both, and even has Shupe coming in with a new wave vocal line. Shupe also continues to prove that he’s a well above average punk bass player.

All of the various musical elements just seem to coalesce very well for Paper Thin. The lyrics deal mostly with individual struggles and problematic relationships. Only the opener, and closer “Missed In Formation” get vaguely political. “Fading Away” is a personal favorite that talks about how many people end up leaving our midsize city. Paper Thin is a six song, 16 minute EP. It’s currently only available digitally, but there are high hopes for it getting pressed on wax. It might just appeal to former Lippies’ fans who were scared away by The Bloody Lips’ sonic aggression. It will certainly appeal to fans of ‘77 style punk. Highly recommended.