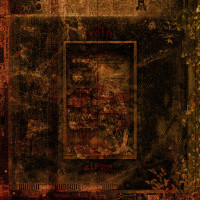 There is something new crawling about from the depths of the late 90s / early aughts Metalcore and Screamo scene. It’s like Cell from Dragon Ball Z who came from a future timeline, designed to possess all the abilities of the greatest fighters/bands to have ever inhabited or visited Earth; with the result being a "perfect warrior"/”perfect band”, possessing numerous favorable genetic traits and special abilities.

The result might be total annihilation, or just some decent music that is new, yet familiar.

This 2017 split comes from two fresh bands that are quickly gaining ground, Vein and .Gif From God. Right away, I will get this over with and name-drop some bands so you can get a quick reference on what these folks sound like.

So check it, these two bands all sound like:

Ugh, ok so name dropping aside; let us keep things simple here. This is stellar work and if you have any inkling of curiosity and love for those bands and particular styles, then you should have gotten on this yesterday.

.Gif From God sound frantic and almost to the point of needing to be on suicide watch. I can only recall the most ferocious parts of Orchid that maybe stack up and that is a compliment because Orchid were great. It is scathing, nasty, and downright harsh on the ears. You like that stuff though, right?

Vein on the other hand take what was considered the better parts of the last, weird phase of Jerome’s Dream (the album Presents) and add a lot of vocal distortion and banshee wails from both vocals and guitars. The band does not seem to be afraid of being a bit experimental when it comes to their stylings and that is a good thing. Effects pedaling are all over the place with very tight drumming and chunky bass grooves that help bring the mosh pit to the bedroom.

Recently bands such as Code Orange and Jesus Piece are strafing aside and adding more elements to their sound, trying to push the doors open a bit more. This split displays the same and adds depth to an almost stale scene, making people take a second glance at something they might have forgotten or never had the chance to experience. It feels exciting and recalls just how amazing Hardcore Punk was evolving back then.

Vein and .Gif From God are two bands to focus on once their next releases come about and they will have to prove whether the hype is real. Until then you have this little ditty and I totally recommend that you dig it.

Heritage Unit: Everything Made Obsolete