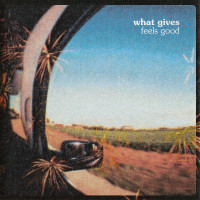 In the landscape of bleakness we currently call reality, it’s important to feel good. With seemingly endless 2017 malaise on loop across our media, we should reflect from time to time that it does truly take an effort to unwind, relax, and have fun. Comprised of members of Elway, Annabel, and ex-Dowsing, Chicago’s What Gives provide us with a perfect opportunity to do so with their debut LP Feels Good. Aptly, the album’s title comes from the feeling members got in the studio when they hit the right take.

Feels Good is a great summertime record, especially in the late summer months as it stalls out into fall. It’s a sunny collection of indie-influenced pop jams recalling the likes of Ozma, Weezer, and a little bit of Piebald thrown in for good measure. What sticks out across the 40-minute length are the hazy guitar tones and understated melodies. The musical interplay between all the instruments is surprisingly on-point for a band all of two years old, likely to the credit of the tour schedules of members’ other bands.

Album opener “I Feel Bad” is a fine introduction to Feels Good, but second track “Something Real” definitely kicks things off for the album. The mid-section of the song utilizes What Gives’ three vocalists in an earnest call and response to the singer’s pleas for connection answering “I want something real” with each one. “Waking Up Heaven” kicks off the strongest trilogy of songs on the album with the guitars emulating the tones of 90s guitar-pop. The bass easily slides between the fuzz pulling out little melodies holding down the song. “All We Wanted” crescendos into a guitar solo channeling Superchunk into one last sing along of the chorus while “All We Got” continues the familiar sounds heard on Weezer’s Blue Album.

One of the few things working against Feels Good is the length. The sometimes monotone vocals that stand in between the more full-throated sections give some of the songs a repetitious feeling lending to a little drag. Before this feeling sets in, the band shake things up with the last standout track “Slime Time Live” which is the album’s final shot before coasting out on two additional songs.

Feels Good is a solid debut LP that introduces a band with a lot of potential. The lo-fi production underscores some total summer bangers with understated hooks. For people looking to feel good.

Sanction: The Infringement of God's Plan