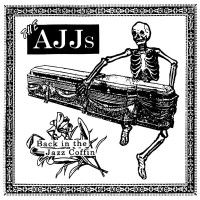 Back in the Jazz Coffin took me by surprise in more ways than one. Aside from its surprise release (unfortunately overshadowed by simultaneous release Brand New’s surprise record), this 5-song EP caught me off guard with the artistic direction I perceive the band is trying to take it in.

Back in the Jazz Coffin album credits only Sean Bonnette and Ben Galexy alongside vocal performances from A. Walker Spring, which harkens back to the early years of AJJ. This seems to be attempting a step back towards the days of People Who Can Eat People and Only God Can Judge Me, but elements of the band’s new sound do make their way into the production, such as the atmospheric synth tones that wash over many of these tracks and the increased prominence of percussion. Really, this feels more like a collection of the low key b-sides from Christmas Island or Knife Man (and “Border Patrol (Yuma)” sounds just like “Backpack” off the later), than something you might expect from the first incarnation of the band.

While I have no problem with the presentation or sound of this EP, I can’t see myself coming back to it all too much in subsequent years. That’s not to say that these songs are bad or poorly written, but they don’t live up to the standard that AJJ have set for themselves with their earlier acoustically driven records. I may return to “American Body Rentals” and “Fuckboi” but those are really the only two songs I feel are worth checking out if you’ve heard all of AJJ’s material up to this point. This EP was best as a surprise release; it’ll satisfy the appetite of the fans, but it’s nothing to hype up all too much.