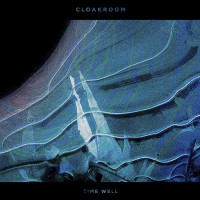 Cloakroom are a band I've always followed because they were on Run For Cover -- one of my favorite labels. Their brand of emo/shoegaze has always appealed to me and moving to Relapse Records, known for more metal and louder bands, got me interested even more in Time Well. What ensues is growth from their sound of old, an evolution they always hinted at, but while expansive, it feels like they've sacrificed too much melody for mood. Is it bad? No way. But it reeks of the Citizen, Title Fight and Turnover dreary sound that I tried to get away from when Will Yip unleashed his last wave of similar-sounding bands.

"Big World" off the bat feels like new-era Title Fight while "Concrete Gallery" feels like a stripped-down metal song. You can tell they're trying to find their footing early on with a lot of psychedelic experimentation taking place musically. "Seedless Star's" sludgy feel affirms this as the Indiana band grows thicker and thicker with reverb-laden and distortion-drenched walls of heavy sound. It's fuzzy, expressive and well, gloomy. The downbeat rhythms take some getting used to but while some tracks move to crush you, others leave you contemplative in sweet, tranquil melodies. Who knew Cloakroom could be so deceptive? Still there's a struggle within at when to go loud and when to dial it back. You can feel them calibrating throughout.

The soft-to-loud dynamic of "Sickle Moon Blues" is probably where the band gets it most right as things start to barrel into the tranquil homage to bands like Brand New and Manchester Orchestra via the record's self-titled track. The way Cloakroom dissolve all these varying influences into one, I can't even begin to fathom, but they nail it. That said, the record runs a bit too inconsistent for my taste and a tad too long at over an hour. It's dragging at times and I just feel like it needs more jolts of energy. However, Time Well is time well spent. Not a bad effort from a band that I'll keep following.