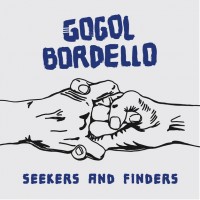 I had heard of Gogol Bordello for years without ever looking into what they were. I was intrigued by the concept, I just never gave them a listen. That changed at Riot Fest Denver 2014 when I won my way into the festival by winning a radio email contest where the question was “Where is Gogol Bordello from?” While everyone else was probably pouring in answers like Ukraine, Romania, or Slovakia, I took a few seconds to Google the correct answer which was “The lower east side of Manhattan.” Because they won me my way into the festival, I decided to check out their set, and I was blown away by their complex and lush instrumentation and the thunderous stage presence of Eugene Hütz, which was then dwarfed by the monstrously sexy stage presence of supporting vocalist Pamela Racine. Even last year at Riot Fest Denver 2016, where getting a spot in the crowd for Gogol Bordello meant giving up your spot in the crowd for the ever important Misfits reunion, Gogol still managed to draw a massive crowd. If you haven’t gotten a chance to see them live before, do yourself a favor and get out to one of their shows. I’ve always been a fan of combining other genres with punk, because I believe that’s the important lesson that Joe Strummer left us with about what it will take for punk to survive. As to whether it truly qualifies as punk, or if the gypsy element overwhelms the music, well, I tend to favor a very loose definition of punk and definite it largely on its spirit first and foremost. So yes, Gogol Bordello is one of the most creative and original punk bands out there.

Seekers and Finders doesn’t find Gogol Bordello straying far from the formula or style that’s made them successful for all these years, but they certainly manage to make it sound fresh again. “Did It All” kicks off the album with a primal energy that creates the momentum for the following two tracks, “Walking on the Burning Coal” and “Break into our Higher Self.” The title track features a guest appearance from Regina Spektor, a Russian-born piano-based artist who also claims the spirit of punk as part of her musical style. Hütz and Spektor have strikingly different singing styles that create a jarring, though not unpleasant, contrast between them as the song seems to invite the listener to join in a folk dance. A few songs, like “Familia Bonfireball” and “Love Gangsters” feel like instances of Hütz coming up with the title of the song first and then building the song around the two letter phrase he came up with for the title, but then never being able to really successfully sell the listener on how clever the title is. “If I Ever Get Home Before Dark,” though, is such a beautiful song that builds up for a long time towards a gorgeous crescendo, making for a song that should remain a Gogol Bordello classic for life.

Seekers and Finders doesn’t break the mold that Gogol Bordello have made for themselves over the years, but it also doesn’t sound stale or overdone at all. The band maintains the enthusiasm and vigor that got them this far, churning out yet another classic album. If you like what you’ve heard so far from Gogol Bordello, you’re going to love Seekers and Finders.