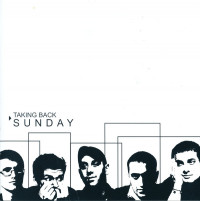 Here is the spawning of monsters. One, a massive volcanic force that will be remembered in high regard and the other, seven shades of color from gold to nutty brown.

Taking Back Sunday self-released this six-track ep in 2001 with their starting lineup, having formed in 1999. There is some history here that’ interesting, but for the sake of keeping this short, you can go online and find out all the Dramarama that surrounded the band at this time circa (2001-2002).

The spawn that came from TBS was none other than “rival” band, Brand New. Now in terms of artistic quality, Brand New managed to earn major respect and an appreciation for their talent, whereas TBS has faltered in recent years, or more like the past few albums have been stinkers.

However, back to this ep, which you can hear in less than 25 minutes; you get a glimpse of early influences like say, Sunny Day Real Estate and great Midwestern bands such as Braid and The Promise Ring. There is a tiny hint of the 2000’s Emo scene that was to come also, and it of course became clearly defined with their 2002 debut, Tell All Your Friends, but right here this ep is quaint and not asking for much.

Perhaps the real treat is that Jesse Lacey manages to get in on one or two recordings. You see the band recorded the fourth track “Go On” and sixth track “Summer Stars” on New Year’s Day 2000. Sometime afterwards, Jesse left due to a “disagreement” and Adam Lazarra filled in on bass to complete the remaining tracks and get the ep out that summer, but there is a spark there on these two tracks and you can hear Jesse sing backup on “Summer Stars” which is awesome.

Not long afterwards Antonio and Steven left and TBS pushed Adam to main vocal duty and recruited Mark O'Connell for drums and Shaun Cooper on bass. In the end, this little ep is a footnote in the bands history, but its importance is great in regards to what came after. I find this sort of stuff very interesting and if you are curious, I suggest giving this a listen. Just do not go looking for a legit copy since secondhand prices are insane.