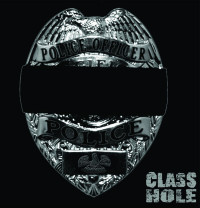 It seems like everything from New Orleans is just a little nastier. What else would you expect from a hardcore band from the same city as Eyehategod, PEARS, Thou, Crowbar and Goatwhore? Classhole is in fact a hardcore band from Nawlins made up of former and current members of Eyehategod, Outlaw Order, Hawg Jaw and Mountain of Wizard. Their caustic, aggressive punk is undeniably flavored by the sludge and doom that NO is best known for.

Classhole has been kicking around in one form or another for more than 15 years, but their self-titled album is their first full length. It’s 15 short, noisy, nasty, harsh hardcore songs in just under half an hour. The angry words deliver tales of unclean living, clashing with the cops, and other generally bad behavior. The songs run one right after another with very little gap in between. If Classhole has a weakness, it’s that tracks all kind of blend together.

The guitars and bass are really thick, and create a solid wall of noise. The tempo varies from breakneck hardcore and blast beats to the occasional sludgy, doomy breakdown. The vocals are harsh, slightly distorted, and mostly delivered in a shout. The production is pretty raw, the way a good hardcore record should be. Classhole oozes with antisocial hostility and anger. The faster songs might remind you a bit of Toxic Holocaust.

“Bloodshot”, “Breathing Down My Neck”, “Frustrated”, “Full of Hate”, “Obsolete” and “Taste of Chaos” are all highlights, but the quality of the tracks is fairly consistent throughout the record. These are not upbeat sing along songs, but the tales of pain and frustration will grow on you. Classhole is ugly and unpleasant, in the best kind of way. If you’re into that kind of thing, and you probably should be, check out Classhole.