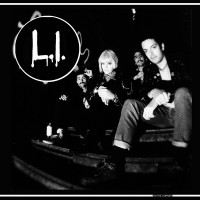 It has a certain sort of logic that a band from Vancouver, British Columbia would have a similar style and sound to an early nineties grunge band. Washington is next door and there probably isn't much difference between Skid Row and East Hastings. On the Corner by L.I. has a style and content reminiscent of an eighties hardcore band or an early nineties grunge band about life on the streets and addiction struggles. Witht he shrieking guitar and songs that feel like they are about to fall apart, comparisons to Mudhoney would be apt, albeit this band has a bit more Flipper int heir DNA.

The vocals are hoarse and shouted and the guitars are distorted, fitting the dark and edgy subject matter and creating  a sort of doomed atmosphere. Some standout tracks include "On the Corner," an ambiguous song about either waiting to make a deal or ambush someone on the street; "Clean Living," about trying to overcome an addiction; and "Night Fever" about having tremors at night from substance abuse. The fact that the band dwells so much on this issues gives the release some depth. Were a song or two about that subject might seem exploitative, the fact that they dig in so deeply into the topic gives it a multi-facted look.

The band has potential and its rawness is honest. The throwback influences from grunge are interesting, if geographically understandable, since few bands do that. This band's work is worth watching.