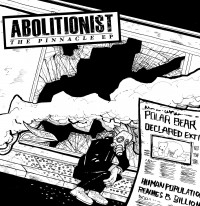 But, while this might appear to make for long, winding crusty numbers, instead, he band has taken a somewhat surprising route and trimmed back the fat. these are among some of the band’s shortest and most compact songs and that strategy really brings the band’s skill to the forefront. They’re still going for an epic statement, but the fact that it’s compact now underscores the band’s most important aspect.

As they’ve previously established, the band focuses on environmental and socio-political issues. “That’s no forest, stupid” takes an interesting stance on environmental protection. Essentially, the band argues that any non-native species, including farmer’s crops, are harmful to the environmental system and cuts down on total biodiversity. Likewise, “I am not alone” turns the concept of punx rebellion on its head. The band declares “let’s all behave!” At first glance, that might seem silly, but perhaps the band is drilling deeper than most bands of their ilk- that is, the band is urging people to “behave” with each other even if that good behavior is in contrast to governmental or contemporary societal dictates. There’s a lot to pick apart here and while this release is only four tunes, it’s got much more meat than most 12-inchers- and the meat is smothered in a unique sauce to boot.