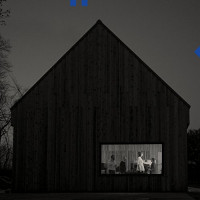 The National have always been an emotionally heavy listen that resonates so differently with me now, in my 30's, than they did in my immature 20's. It's only now I can fully appreciate the depth, understanding and intensity of this band and Sleep Well Beast is a perfect example why. The band's seventh full-length documents, in detail, lead singer Matt Berninger's life being married to co-writer Carin Bresser, and what transpires is an angsty, real-world behind-the-scenes view into the ups and downs of such a commitment. After living with someone I planned to marry a year ago only for things to fall apart, it hit home for me even more, vividly painting the struggles of this beast we call love. It's beautiful at times, but as Berninger notes, when it gets ugly, it's snarling and tears you to shreds.

They don't reinvent their sound much but I can honestly say having more guitar-play works. I remember falling in love with "About Today" from the MMA film, The Warrior, and off the cuff, "Day I Die" is a gut-punch. The cutting guitars and vulnerable lyrics pierce like a Muse meet Kasabian meets Kings of Leon shot of indie-rock but all to a backdrop of musical despair. It really reminds you to prepare for the moment where we'll inevitably have to say goodbye to the love of our life, through death or separation. This record's also about self-admission, not just blame, as seen on the electronic beats of "Guilty Party", or the livelier guitar-aggressive "The System Only Dreams in Total Darkness" -- which is one of the rare upbeat and funkier tracks on display.

Then you've got tracks like "Carin At The Liquor Store" which truly exposes how frail things can be. This is indicative of the slow-burn and minimalist vibe off the back-half of the record. It's a soothing, piano-driven ballad that scares you as to how dire things get when communication breaks down. The melodic guitar solos sprinkled on top add this extra effect of despair. It actually calls back to "Born to Beg" earlier on, which as you can tell from the title shows how torn Berninger is in this life where he's prepared to do anything and everything for his lady. This second half wanders off a bit as it drags on and on, but if anything, the lyricism is worth sticking through even if it's a struggle musically.

I don't want to spoil too much but this record is a must-listen. For hopeless romantics, it's a novel that paints visuals so quickly like an indie film made for Sundance, TIFF or an Oscar. It's amazingly descriptive and swings from orchestral swells to indie-rock hooks to subtle strings that will leave you in tears live. Sleep Well Beast is a heartfelt confession plucked straight from a middle-aged couple's diary on how good and bad things get, how we feel to leave at these tragic moments, how death touches us from that moment we learn to love, but most of all, it teaches us that love is worth fighting for and work has to be put in. No matter what.