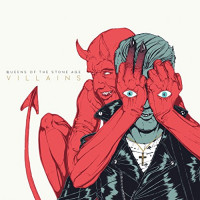 Queens of the Stone Age have yet to make the same album twice. But over their seven full lengths, they have established themselves as Josh Homme’s creative workspace. A master collaborator, Homme has toiled with various sounds, effects, and people to varying degrees of better-than-average success. On Villains, Homme tries something new – bringing back most of the team from …Like Clockwork and making a nine-song cohesive album.

Troy Van Leeuwen, his most frequent QOTSA collaborator, returns. As do Michael Shurman on bass and Dean Fertita on guitar, both from …Like Clockwork. Ex-Mars Volta drum powerhouse Jon Theodore is the newer kid on the block, but contributed one song to the previous album and has since become a permanent member. Giving him a whole album lets him prove his hard hitting is a natural fit. “Head Like a Haunted House,” in particular, demonstrates Theodore and Shurman’s expertise. The guitars try new things while staying spazzy and hard enough for older fans. But the addition of producer Mark Ronson (responsible for everything from Amy Winehouse to “Uptown Funk”) can be felt, especially on “The Way You Used to Do,” the album’s only chance of a single.

But Villains is absolutely another Queens of the Stone Age album. Josh Homme has made a career of mixing rock, swagger, and slime in all aspects of his creative life. He’s a rock star in an age where rock stars don’t exist. But now some of the layers start to peel away: Homme isn’t twenty-five anymore and aging is a constant theme. On “Un-Reborn Again,” Homme wrestles with this: “Buried so close to the fountain of youth, you can almost reach.” Songs are named “The Way You Used to Do” and “Domesticated Animal.” Even opening track “Feet Don’t Fail Me” demonstrates parts aren’t functioning the same.

This theme is what stands out about Villains. Homme makes QOTSA personal, or more so than he’s ever allowed before. And not just with age, but that definitely motivates the change. Homme lives whatever the familiar rock star life can be with a wife and three kids. There is a weight and balance he both embraces and struggles with. Villains sorts it out through song. He can still reek of sleaze and have the love for his family come across. On slow burner close “Villains of Circumstance” – a similarly telling title – Homme croons, “Close your eyes and dream me home, forever mine, I’ll be forever yours.” On “Fortress,” he assures, “If ever your fortress caves, you’re always safe.”

Villains finds an aging rock star partially uncomfortable with the life he’s transitioned into. But in the end, he makes peace with it. Things are different but Josh Homme will always be Josh Homme (for proof look no further than the video for “The Way You Used to Do”). This is about gracefully getting older without losing his edge, and he proves it’s possible.