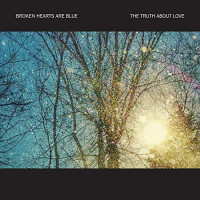 Let us take another dip into the obscure.

Broken Hearts are Blue were an Indie/Emo band from Detroit, Michigan that existed from 1995 to 1997. In 1996, they released one full-length album titled The Truth About Love. While they didn’t break new grounds from the Midwest scene that was going on, they at least had their own style that bore some similarities to their peers but had enough characteristics to keep them sounding fresh enough.

This is a great album honestly. I find it comforting to hear and the lead singer, while sounding like a frailer Jeremy Enigk, at least gets the job done and in one of those rare cases, fits together like a glove. The rest of the band is good as well, playing their emotionally drenched tunes with nice instrumentals and just enough power to get the message across, whatever that message may be.

The album has a great opener by the name of “Because I Am” which I dig a lot. The music itself seems amateurish and too simplistic but maybe that is why I love it. It sounds sloppy, almost like a high school band practicing, but that is where it inherits its charm. Moreover, as I said, the band is good at what they are doing here.

Keep your expectations in check. They did not sound like those other acts you know about.

The albums spreads open a bit more with songs like “Get'n Over My Sassy Self” showing some of the quiet-loud dynamics that a lot of bands seemed to do back then and as well as the track “Last Night's Tattoo” accompanying along with some nice lyrical melodies that are actually catchy.

I am a sucker for more gut wrenching type songs not negated to being crybaby-like. If they have some amount of maturity and rational thought then I can dig them, but if they sound like something coming from Chris Carrabba’s personal diary then I scoff. Track number 4, “Luv Leaningless R” hits the right spot. It makes me retrospect some memories before I had a quarter life crisis…

Sometimes a Mac-truck of a song that you never saw coming hits you hard.

The second half of the album changes pace into a more somber affair with a weighty, downtrodden vibe but you can probably get enjoyment out of this type of music if you are in the right mood. Track seven “Blue Times” is a heavy hitter that broke through and trounced my expectations of similarity so there are some bits and parts that shake up the tone. Closing track “Pax Indigo” is an acoustic love song that is charming, honest, and not reeking as a “dude bro with a guitar” ballad. I appreciate the simplicity there.

This was one of those totally out of nowhere albums I found posted on some forum. Taking a chance listen is fun sometimes and in the case of this band, a chance meeting ended in a connected relationship to the music that I will never forget. Dig it…