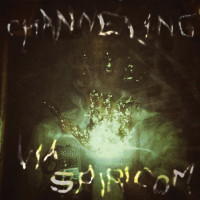 California’s The Channeling featuring Chris Mann (Leftover Crack, Intro5pect) and Donny Morris (Leftover Crack, Rats In The Wall, Intro5pect), is tough punk band to classify. When listening to their 2015 release Via Spiricom one thing is for sure — they are not your typical SoCal melodic punk band. Actually, they’re far from it.

Via Spiricom has some dark musical overtones through out it making it a pretty ominous record. You can definitely hear that the band wanted to do something very experimental between the echo-y guitar effects, vocals that go very soft to very high in what seems like an instant and the horror lyrical themes especially when it comes to tunes likes “Silverscreen” and “Further.” After a long tension build up in the intro of “Silvercreen” soft guitar chords are lightly played behind Chris’s whispery vocals. It does’t take long for his the track to pick up steam though. The drums are hit hard, the guitars become crunchier and Chris’s vocals soar off into a much more loud and anthemic fashion.

HoweverIt isn’t all melodic punk anthems on Via Spiricom. The Channeling veer off into a different direction with the song “Saturdaynightmare.” This is where you an hear the band’s rowdier side. Immediately a thrash-y riff coming from a fuzzy guitar starts it off followed by frantic drumming. Not only do you hear Chris’s impressive yelling skills, but he switches off lines with guest vocalist Eva Hall of Rats In The Wall. After a bit of an instrumental bridge, the song build up to a point where Chris switches to singing and backed up by some gigantic “woahs” from the back up singers. “Saturdaynightmare” is definitely one of the more experimental songs on the record, but it works well and it also shows how versatile of a vocalist Chris Mann is.

The Channeling’s Via Spiricom is not a your typical punk rock record. If you are looking for to broaden your punk rock horizons with something more “out there,” then definitely give this album a listen. If you dig it, then check out the limited Spectral Edition Box Set. The CD comes in the this very cool leatherette box with a poster, a replica film strip, some silkscreen art and other cool stuff.