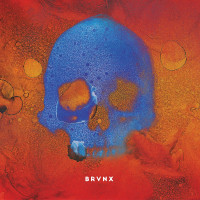 IV was the album that sealed the deal for me on The Bronx. I loved their Mariachi work as well but this here was the band's definitive statement on rock and roll. Cut to the present and it's interesting how V is shaped -- given the political climate and how disconnected we are from humanity with the digital age in the palm of our hands. Hearing The Bronx wax poetically on all these topics while still keeping the slim, trim and rollicking essence of their punk train going deserves major plaudits. I didn't think IV could be topped, but fucking hell, was I wrong.

V is obnoxious, fast-paced, loud and it navigates every bit of punk territory you'd expect. But, especially with the back half of the record, it's catchier and some of their most shoutalong protests in the face of adversity. There are so many touchpoints here to hold onto -- Rolling Stones, AC/DC, Ramones, Iggy Pop and Springsteen to name a few -- but everything is done with The Bronx's unique stamp.

From the Metallica-esque "Fill The Tanks" to the Skynyrd-infuenced design of "Side Effects" they've never sounded as angry and as relevant in my opinion. The hooks are huge, the choruses are buzzy and addictive, and to be honest, it's an album that more or less can be started at any song. The replay value is way high and it just rolls on and on with its cynicism and aggressive outtake on life. When things are dialed down, as with the leaner tracks like "Two Birds" and "Cordless Kids" I think the band's presence is even stronger. Stripping these layers back also are where Matt Caughthran's vocals shine for me. His gruff, caustic demeanor matches their acidic punk take and helps sink their teeth even deeper into you. If anything V bridges the gap pretty well, capturing the pop and energy of its predecessors but still wading through enough new territory to whet the appetite of the futurists.