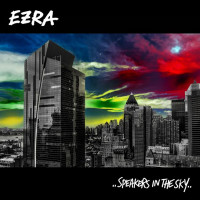 The first time that I heard about the notion of Morning Glory’s Ezra Kire completing a solo record was over a year ago when he was featured on an episode of Ryan Young’s Anxious and Angry Podcast. Sure, they played a song off the album, but it sounded like Ezra had no intention of releasing it. That episode didn’t age well in that regard because the eight-track solo album Speakers In the Sky has finally been released — through Anxious and Angry no less.

There was a slight danger that Speakers In The Sky could have been War Psalms-lite, but if you thought that when the record was originally announced, then you definitely underestimated Mr. Kire. Speakers In The Sky is much more piano and vocal-centric than what you find on M-Glory’s releases. You can tell Ezra really let loose and did what he, and he alone wanted to do for this album.

The track “Civilian Song” is comprised of just an acoustic guitar and piano. “Everything Is Wardsback” is just piano-based. But what makes these songs so incredible is how Ezra is able to fill every single word that he sings with so much feeling. His lows are gravely and his highs are anthemic. And the way he is able to go back and forth between the two is not only amazing, but that skill adds so much to each track on the LP.

Ezra clearly likes to have his songs start soft and build up to a big finish. “Love The World We Have” starts out with Kire singing over a lightly-played piano. Then the rhythm picks up a bit and that is when the distorted noise comes in which is what eventually leads in to massive guitars and drums joining in while the Ezra’s vocals soar off. This same kind of build up happens between “Soldier On” and the title track. “Soldier On” is once again Ezra singing over a piano, but this time there are some very beautiful vocal harmonies incorporated into it. While “Speakers In The Sky” is much more intense than “Soldier On,” it still maintains the lyrical theme of “solier[ing] on.” This song is where Kire’s vocals are truly put to work. It contains some of the most insane screaming melodies you’ll probably ever hear.

Another track that is absolutely worth mentioning is “Let It Go.” This is where Kire masterfully infused piano into punk rock and making it sound very natural and not forced. He mixed all that with some of his signature anthemic vocals and created one the stand out tracks not just of this record, but quite possibly his career.

I have said it before and I’ll say it again — Ezra Kire is one of the most underrated and talented song writers in the scene. His contribution to his previous bands, the Morning Glory releases and now Speakers In The Sky is yet another piece of evidence proving that. The fact that this album may never have seen the light of day sounds crazy now especially after listening to it. It would have been a real shame if it didn’t because it is easily one of the best records to come out this year. Thankfully, we have it now.

Note To My Fellow Vinyl Nerds: