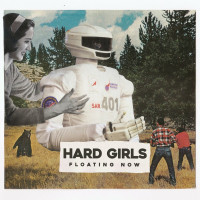 I'm pretty much late to the Hard Girls party and had to take a crash course to see what the hype was behind them. And everything I heard was true -- definitely a solid punk band that crafts a unique spin on indie/punk. With roots embedded in acts like Pteradon, Shinobu and Classics of Love, it was clear that there was a fearlessness to their style, one that didn't just pay tribute to their parent acts, but to the likes of Superchunk and other outside guides. So I worked my way back and the record that stood out the most was A Thousand Surfaces, bleeding cool and dripping with attitude. Floating Now tries to live up to this I think, and rightfully so because this to me is the bar for Hard Girls. While it really chips away though, it was always going to be a tall order. It drives and drives, especially in the first half, but the second half tapers off leaving Floating Now a few swings short of the home runs they're accustomed to.

From the fuzzy indie-punk opener in "Field '99" to the summer bounce of "Codeine Dreams" this record kicked off and rolled you down a hill. The tracks aren't just catchy or singalong, they're shoutalong. Even the slower burns like "Echolocation" are made for screaming and not that Jesse Lacey-laid back vocal tone. Sure, on the record it sounds neat but Hard Girls -- let's be real -- they're a band you yell to at the top of your lungs. Like I said, the first half of the album was blowing my fucking mind. Another gem's "Camera" which has that Joyce Manor pop to it, and given that Jack Shirley produced this as well, again... no surprise. He leaves just enough polish on things to package it nicely but still leave a grainy want-more feel to things.

However, things just lose steam on the back end for me. It's as if Hard Girls wanted to strive for a bombastic Jeff Rosenstock sound off Worry, but were torn between the sprawl of The Smith Street Band. Not a bad middle ground to be at stuck in but other than "Guadalupe on the Banks of the Styx" (with a badass soft-loud dynamic) and a redone "Dulcet Tones", the latter songs don't impact as much as the earlier ones. However, they're not bad at all, especially when you consider the standard that Hard Girls have set. Their weaker songs are still top quality and deserve recognition. So while Floating Now doesn't quite get it over the fence, when Hard Girls swing, you're more than cheering because you know, no matter what, you've got your hands on a quality record.