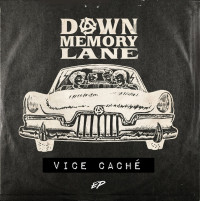 Québécois melodic punks Down Memory Lane come roaring back on their sophomore release, the five-song Vice Caché EP. On this album DML takes several steps forward, while keeping their feet squarely in the mid-90s EpiFat sound that the band’s identity is rooted in. But first, I feel I need to address l’éléphant dans la salle: I can’t really understand a word this band is singing.

Haha! I jest... kind of. As opposed to their debut EP from last year, on Vice Caché they have chosen to write and perform all of the songs in their native French (or Canadian French if you are being picky). Even though I spent 3 ½ years in France, I didn’t catch on to the language very well and now, five years out, I have lost of most of what I learned anyway. As such, like other groups who perform in a language I don’t understand such as WIZO, or Pearl Jam, the lyrics are almost completely lost on me. For good or ill the vocals, both primary and back-ups, serve to become just another integral part of the music itself. For my part, this album doesn’t really suffer for it, and is still a blast to listen to.

Starting off we get a humorous sound bite (source unknown, I couldn’t track it down), which let’s you know where the language portion of this album is going to go ("En Francais !"). This leads into the titular track, “Vice Caché,” on which DML sets the tone for the entire album: fast and technical melodic punk.

“Le Mirage” is a hard number that culminates in a great sing-along chorus. “Un Seul Chic” carries the middle of the album and, while likely the weakest of the bunch, in that it is likely the most straight-forward front to end, it still stands tall among the output of contemporary bands.

“Productions J” was released as a video prior to the album's release, and is the most happy-go-lucky sounding of the bunch, featuring multiple layers of backing vocals in spades, and really brings out what this band can do with several different voices.

The final track, “Canal Désinformation” mixes fast and slow at the start before building up into a driving beat that hammers away until the song runs itself out and quickly fades off.

DML has really stepped up their game here. Performances on all of the instruments are noticeably improved and everything is locked into place. Not only is the band that much tighter than before, but the technicality and virtuosity is a step up. Most notable is the composition of the songs: transitions are a plenty, riffs and solos are well-placed and performed with aplomb, and the combination and layering of the main vocals and the plethora of backing vocals are masterful. In fact, the quality of the vocals is under a bigger microscope from me because I can’t follow the actual lyrics as much, so they're just another batch of sounds, and yet I still couldn’t find anything to fault.

When all was said and done, I only really had two areas of concern. The first is that a couple of the songs seem to just fizzle out at the end. This isn't a deal breaker, but since they are both fairly energetic and well-composed, it felt weird to then just kind of… stop. Also, this album doesn’t feel very “solid” in the aural sense. I’m a big proponent of powerful, full-bodied music, with bass being mostly felt and not heard. Vice Caché, to me, sounds a bit hollow in that respect. This may be a product of the more technical nature of the guitars and bass, which kind of demand a crisper sound, but it seems the production may have erred a bit too much on the side of clarity. It’s not so bad that I can’t make adjustments on my end to rectify this, but it is noticeable enough that I felt I needed to take note.

Overall, this is an excellent release. I admit that I have been bullish on Down Memory Lane since hearing their debut last year, but when a band keeps doing things right, how can one not be?

Citizen: As You Please