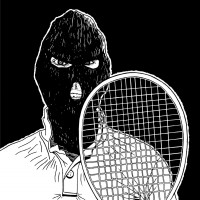 Against all odds, everybody’s favorite Kids in the Hall inspired musical act has released his debut LP. The Eradicator is the follow up to 2015’s Eradicator 10 inch EP. The Eradicator is a mask wearing, squash obsessed spazz who sings songs about, you guessed it, squash. The man and mind behind the mask is the mild mannered Andy Slania. He often performs as a solo artist playing to a backing track, although a handful of semi-famous punk musicians have helped him out live and in the studio. The EP gave us a little insight into the mystery that is The Eradicator, but the LP paints a much clearer picture. While the EP was basically 5 aggressive songs in 10 minutes, the longer format allows The Eradicator a chance to stretch out and expand things musically.

Opener “I Am The Eradicator” starts off aggressively enough. It’s a four count on a cowbell followed by brutal noise and a primal scream. The song goes on to remind the audience that he is The Eradicator and that we are not. The Eradicator’s tongue remains firmly in his cheek over the course of these 12 songs. “I Live, I Die, I Live Again” starts with the same cowbell and scream. It might go so far as to claim immortality. “My Mighty Scream”, as expected, also has a fair amount of screaming. It’s the scream of man who will settle for nothing less than being the greatest squash player ever. The riff heavy “One Rung at a Time” and “The End of the Line” perfectly sum up this sentiment. The music is what I would describe as digitally aided hardcore. The vocals might make you feel like you’re being yelled at, but I’m pretty sure that’s the point.

“I’m a Squash Man” has a guitar lick straight from FM rock radio, but then tacks on a digital twist at the end. On “Squash Queen”, The Eradicator talks about finding his true love. “Because you’re mine/Because you’re fine/Because you hit my balls into walls”. On “It’s You Right”, he explains how hard it is to make love last with his rigorous training schedule. The Eradicator is obviously a complicated man. “The Grandfather of Squash” gets into his dubious family history. “Wake, Hydrate, Baby Aspirin, Squash a Pusshead” is the longest title and ironically the shortest song on the record at 47 seconds. The inspirational “Stop Dreaming, Start Living” is probably the catchiest song in the traditional sense. I’m pretty sure its words of encouragement could apply to just about any situation. “Stop dreaming, start living/Get up and don’t be a pusshead”. Album closer “Civilian/Champion” is almost a traditional blues number until it runs wild at the end. The vocals are even delivered in a sort of baritone croak.

Is The Eradicator a novelty act? Absolutely, but it works because the musical chops are there to back up the gimmick, and because he never breaks character. I acknowledge that not everyone is going to get The Eradicator, but I’m rooting for him both on and off the court. I remember talking to Slania a while back, and him telling me that he wanted to do an Eradicator full length. I was a little incredulous of his ability to write enough songs about such a limited subject matter. I was obviously wrong, and have completely changed my tune on the matter. In the character that is The Eradicator, Slania has found the type of muse that most artists can only dream of. I can’t wait for the box set.

Citizen: As You Please