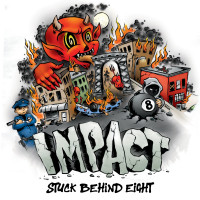 Impact, from Staten Island, NY, have been around for a few years now. They’ve previously released a demo and an EP, all since just 2015. This past August, Impact released Stuck Behind Eight and it is their most cohesive set of songs to date.

The band draws much from the late-eighties hardcore sound, and Impact’s songs are short and explosive. And they tow the line well between punk and hardcore, calling to mind bands like Kill Your Idols or even Mouthpiece.

Stuck Behind Eight’s strongest track is “No Excuse.” The song’s opening riff is tightly wound and the subtle lead in the background gives it just enough to be compelling and full. The vocals do well in keeping pace with the speedy popping of the drums, only to break into a classic hardcore breakdown. The clever move here was to apply sing-along inducing vocals over the breakdown. Bringing that structure out allows for the breakdown itself to feel more melodic and keeps the song from moving too far down the mosh-only-breakdown pitfall.

The EP’s second song, “Fade Away,” offers a more grooving and head-bopping hardcore sound. The song has a bit more of the trashiness of Outburst, but maintains a melody similar to “No Excuse.” The breakdown at the end of this track however is demonstrably heavier. Again though, the vocals do a great job of mitigating that heaviness by offering simple but aptly timed patterns over the breakdown.

The standout aspect of this EP, and the band, is the vocal style. Impact’s singer has a strong instinct for laying down patterns that not only complement the music but that also bring the band’s songs to a better place overall. The fact is, it’s easy to follow a basic pattern in the hardcore realm. The simplistic structure of the genre almost begs for it. But the singer here knows just how to manage his cadence so as to give the songs more body and energy.

I’m interested to hear how the band continues to progress. There is some great guitar-work throughout, especially the eery octave track at the end of the final song. And so Stuck Behind Eight is a fun and engaging DIY release by a hardcore band who is coming into their own. They’re a clear cut above most other young bands in the genre, and are worth checking out for fans of the more-punk-less-metal side of hardcore.

The Moms: Doing Asbestos We Can